I am looking for examples of technologies that were deployed in a widespread way and reversed, so that the earlier technology resumed its pre-eminence (or nearly). (Like what if we abandoned mobiles and went back to landline phones). Can we wind the clock back?

I was thinking of transport cases, which a number of commenters suggested, like streetcars (trams, LRT) which were once dominant in cities, and then faded in importance, and are seeing some resurgence, but nowhere near original levels. Concomitantly autos in central cities, after decades of growth, are now losing mode share. But these have not gone all the way back to the status quo ante-auto.

Perhaps there were other situations we could point to.

This was a surprisingly popular tweet (110 comments to date, well above average). I have not linked to the original poster, though you can track it down through replies to the Twitter link, but to be clear, these are not my ideas. Since Twitter is a mess, I have distilled and organized them below.

These do not constitute endorsement, more as prospective cases to evaluate, in some cases I have comments. This is more than enough cases for someone to write a dissertation on.

I am not clear how many of them hold to the original request of being fully reversed and the technology before the technology being restored.   Also I would not say these reverted cases are necessarily failed technologies, in that they persisted in many cases for decades or centuries. And of course, technologies never really die, but they do fade away.

The ones I really like (in that I think they are really good fits to the question) are bolded.

Dear Credit Card Company:
I make a reservation for plane to Toronto using your credit card.
I used your credit card to hold a hotel reservation in Toronto .
Why, once I am in Toronto, do you decline my card to pay for that same hotel for “suspicious activity”, making me call you (international long distance or hotel telephone rates) to get my card released. (A hotel, that by the way, checks photoID of customers).
Surely, with all the Big Data you have available to you, and the interest rates you charge to customers, you should be able to figure this out. I did all I could to telegraph to you about my travels but write you a letter.
Sincerely,
Annoyed customer. 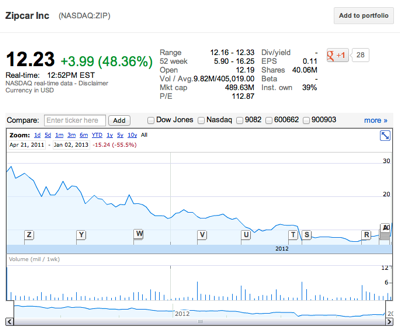 Avis Budget announced it would acquire Zipcar, the to-date essentially profitless carsharing company, for $500 Million. The stock today is trading at $12.22 a share. It is worth noting Zipcar’s Stock Price History. It went public in April 2011, and is off $15.24 per share (55.55 % after today), from an an initial opening shy of $30 per share.

As a former Zipcar customer (member?) I suspect car sharing is the mode of the future, and like fusion power and Brazil, always will be. While I believe it is possible they will overcome their technical difficulties, the problem of scale remains. Even at the University of Minnesota, one of the largest campuses in the US, there are very few available cars at very few locations. There has been more than a half a decade to work out this problem, it just hasn’t taken off.

When I was a graduate student at Berkeley, I was carless, and used the neighborhood Avis as an effective carsharing service, renting a car maybe once or twice a semester. The contract paperwork was a general nuisance, and like any captive customer I was resentful, and the rate killed it. Carsharing with its very high overage charges are in practice similarly expensive. A thicker market would permit lower rates. There are definitely economies of scale AND positive network externalities to be had.

Carsharing is a great idea, and in principle works well if everyone uses it (i.e. if there were a station on every other block, or within 1/4 mile (400 m), just like walking to transit). In the absence of robot cars, this require either really high population densities or really high market penetration. Thus far we have neither in most places. Even with robot cars, it will require a major social change, affecting how people consider property and treat vehicles.

I am convinced people don’t want to think about every transaction, and if they are charged per use, obviously would use less, but will be less happy, and more determined to get a car of their own to avoid transaction costs. Just as we went from terminals and mainframes to personal computers, and internet cafes to internet at home, we went from trains and transit to private transportation once we could afford it. The cost savings will have to be considerable for people to want to go back.

The best market of course is the urban hipster: with enough money to afford, enough transit to get to work and back with minimum hassle, enough childlessness to have a regular schedule, enough desire to signal greenness to avoid owning a car, but enough sense and desire for dates in the country to recognize the occasional need. This is a non-zero market, Avis assesses at over $500 million in net present value of profit over the discounted future. About half the price of a new NFL stadium (about one-half a giga-dollar).

IEEE Spectrum asks When Will We Have Unmanned Commercial Airliners? – : “To win over the public, the autopilots of tomorrow will have to start today by exploiting niches where civilian pilots can’t or won’t work—just as was the case in the military. With time, the systems will improve and eventually fan out to conquer additional segments of the broader market.”

Adam Ozimek @ Modeled Behavior describes The rise of micro-markets: “I also sometimes comfort myself knowing I would be outbid in micro-markets. If I’m two minutes late for a train and I find myself thinking “surely the welfare gain to me of them waiting two minutes is bigger than the loss to all the other passengers for being two minutes late!”. But then I consider an auction where I had to buy off every riders’ extra two minutes, and I know I would not win that auction, which I find comforting in a way. When micro-markets like the one I imagine here are real and widespread people will have a less hard time deluding themselves like I initially do. The angry guy in line behind you in line who is mumbling about how late he is running will have less grounds to be angry if he can offer you to buy your place in line but it is not worth it to him.”

Getting Around Minneapolis finds maps of the diffusion of street pavements1895 Paving Map , See also 1899 and 1910.

Remember all that talk about the “Death of Distance“. Well it turns out even in the supposedly distance-free internet wholesale market, distance still matters and is being suggested as a price differentiator. Connected Planet writes about: The return of distance-based pricing (for wholesale ISPs)? :

“Using just three or four service tiers could improve a wholesale ISP’s profit substantially, the researchers argue in a paper to be presented at the SIGCOMM conference in Toronto today.

The paper titled “How Many Tiers? Pricing in the Internet Transit Market” is based on data collected using a model developed by the research team. The researchers say their creation is the first economic model that takes real traffic data as an input to understand the impact of tiered, destination-based pricing on an ISP’s profit.”

Obviously market differentiation and stratification is important, with more differentiators allowing producers to capture more value (and consumers less). And obviously the number of links that are traversed is associated with the underlying cost of infrastructure. The only question is whether the increased transaction costs outweigh the profits.

I get quoted in the Strib …

One of the biggest victims could be the proposed high-speed rail line from Chicago to St. Paul. Even before the historic budget impasse, the rail line to Minnesota was in jeopardy because Wisconsin Gov. Scott Walker opted out.

The budget deal now kills high-speed rail funding for the rest of the fiscal year — a cut of $2.9 billion. That throws further into doubt the money for which Minnesota was applying after Florida rejected a similar amount of high-speed funds.

“It makes it deader,” said David Levinson, a professor with the Center for Transportation Studies at the University of Minnesota.

When Jeremy Herb asked about the HSR line to Minnesota after the recent deal, I said “It’s still dead”. I am not sure he ever saw classic SNL: Generalíssimo Francisco Franco is still dead.

“I’m sorry Dave, I’m afraid I can’t let your engine idle. The USPTO has just published IBM’s patent application for a ‘System and Method for Controlling Vehicle Engine Running State at Busy Intersections for Increased Fuel Consumption Efficiency.’ Here’s how Big Blue explains the invention: ‘The present disclosure is directed to a method for managing engines in response to a traffic signal. The method may comprise establishing communications with participating vehicles; responding to a stop status indicated by the traffic signal, further comprising: receiving a position data from each participating vehicles; determining a queue of participating vehicles stopped at the traffic signal; determining a remaining duration of the stop status; sending a stop-engine notification to the list of participating vehicles stopped at the traffic signal when the remaining duration is greater than a threshold of time; responding to a proceed status indicated by the traffic signal, further comprising: sending a start-engine notification to a first vehicle in the queue; calculating an optimal time for an engine of a second vehicle in the queue to start; and sending the start-engine notification to the second vehicle at the optimal time.’ IBM notes that ‘traffic signals may include, but are not limited to, traffic lights at intersections, railway crossing signals, or other devices for indicating correct moments to stop and to proceed.'”

As the first commenter says “What could possibly go wrong”.
When will people realize serious Vehicle Infrastructure Integration is essentially doomed from the start? There is no deployment path. We can have smart cars on dumb roads (or as in rail, dumb trains on smart tracks), but trying to do both is asking for failure, the coordination problems are just too deep. The environment could perhaps be more informative, but unless it is informative almost everywhere, it will not be of much use.
I will go on a limb and suggest that in the long run, at all but the most congested intersections we’d be better off with smart cars and no electronic intersection controls (i.e even dumber roads), cars which just detected their environment and navigated appropriately. This can be achieved with roundabouts and similar devices.

Once, you could play record albums (you know, vinyl) while in your car … Highway hi-fi by Chrysler. Of course, you could not use standard LPs, but instead had to use a special 16 2/3 rpm format only from CBS records which played for an hour. Further, these records could only be played in your car. I wonder why this technology did not make it. A later version played standard 45 rpms, which seems more useful, (and could play a stack of 14). This format only lasted a year as well.