After my visit to colleagues at Southeast University in Nanjing, I very fast trained over to more colleagues at the Wuhan University of Technology in Wuhan, another of China’s Furnace cities (so-called because of steel production, or because it is so hot). I spent about three days in Wuhan (and two in Enshi), and at least some of that was spent inside university classroom buildings and hotel rooms, so this is a more limited exploration of the city.

The high-speed rail in China appeared very efficient and was on-time. The only complaint I have is that the tickets were in Chinese instead of dual-language (i.e. no English), though once you knew how to read a ticket, that sorted itself out. Also unlike the aviation system, there are few international users of the the HSR, and very few English-speaking staff. The trains are apparently speed-limited as an ineffective response to the crash in 2011. This can be thought of as safety theatre as the slower speed is still insufficient for a train to safely brake to a stop under circumstances that might lead to the crash. It supposedly will be uncapped later this year.

Wuhan, the capital of Hubei, and the conurbation of three older cities (Hankou, Hanyang, Wuchang) is larger than all metro areas in the US except Los Angeles and New York, yet until this post, most of you have never heard of it, or at best have a vague impression, as it only ranks 9th in the Chinese league tables (ranked by urban population). Wuhan is in China’s Midwest heartland, it is an industrial city, centred like Detroit on the auto industry, though more analogous to Chicago in importance. It is a way station on the path from Shanghai to Chengdu (Szechuan) and Tibet, places you probably have more familiarity with.

I am almost convinced that one other colleague and I were the only westerners in the city at the time of our visit (which may be an exaggeration, but not much), though the University had some exchange students from Middle Eastern countries. I won’t go so far as to say we were the only westerners ever to visit Wuhan, as that is certainly false (my father has been). When we visited Enshi, we were the only ones in the entire very crowded Grand Canyons national park. This is in stark contrast with Beijing and Shanghai.

Wuhan is more polluted and less beautiful than Nanjing. It lacks the ubiquity of streets trees that make much of Nanjing liveable.  It is also seemingly less wealthy, and the people are less well-dressed. It is also growing faster, with a Metro of the same vintage and design as Nanjing. There are coordination issues, as can be seen with the photo of the people’s road agency’s widened street running into a high-voltage power pylon that the people’s electricity utility saw fit to keep unmoved.

The Chinese have what I call a ‘Learned Obliviousness’. When walking across the street, a parking lot, a shared bike path/sidewalk, or even a nominally unshared sidewalk, in China, you cannot hesitate, as that pause will be taken advantage of. Like sharks who must be in continuous motion lest they drown, the pedestrian,, like all vehicles must keep moving. While you as a pedestrian must be aware of your surroundings, you cannot give ground. Everyone is continuously in motion, flowing like the water in a river, where the horn is the basic technology version of connected vehicles “here I am” broadcast, creating a noisy environment.

The most interesting thing I saw was the Concessions area, including the Customs House Museum. I don’t think even people from the Middle East do ‘Righteous Indignation’ better than the Chinese, who are still bitterly complaining about events more than 150 years ago.  The concessions were the result of the Opium Wars, where as the Customs House Museum more or less explains, the dastardly British and their inhumane need for addictive tea resulted in a trade imbalance they tried to solve by drugging the Chinese with far more addictive Opium, and which the otherwise great Chinese people could not resist due to weak leadership of the Qing Dynasty. This seems reasonably accurate. So as a result of the treaties settling this war and related incursions, the British, the Russians the French, the Germans, and the Japanese (from south to north) received concessions in Hankow, along the Yangtze River, territory where they could operate with impunity. The British held on until 1929, the others were retaken by the newly Nationalist Chinese earlier. The nationalist revolution came to Wuchang early, though today Wuhan seems a Communist Party stronghold (in contrast with Shanghai and Nanjing at least).

The street in front of the Customs House Museum has become the main high-end shopping street in town, Jianghan Road. 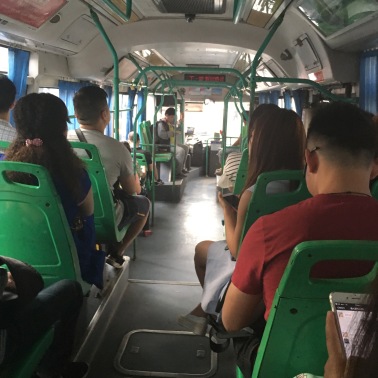 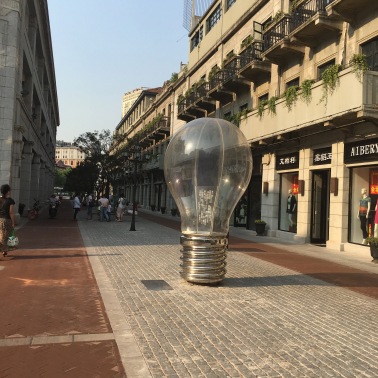 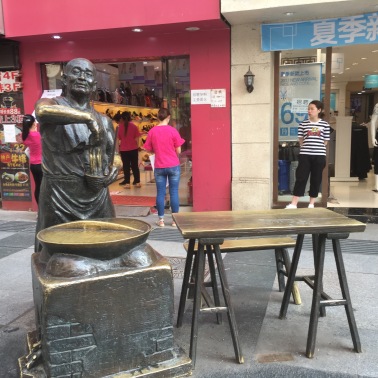 An award winning bus street runs more or less along the western edge of the concessions. While that street has electric buses, the older diesel buses sound asthmatic. More photos of Wuhan can be found here. In some of them you can see the reason behind the local expression “People Mountain, People Sea”.