Noting that transit ridership is generally down in the past few years, Jarrett Walker tweeted:

“Would somebody please do a quick but defensible study on why this is happening in so many US cities? I’m tired of having only anecdotes.” 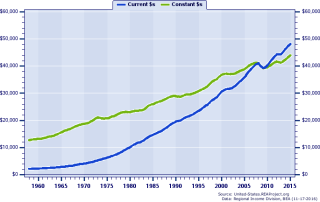 Income since 2009 has risen. At the trough of the recession, per capita income in nominal terms was just under $40,000, as of 2015 it is about $48,000. It is up in real terms as well. Elasticity of Transit demand with respect to income suggests that as incomes rise, transit demand falls. In other words, for most people transit is an inferior good (demand falls as income rises), with an income elasticity of about -0.98 (a 1% increase in income resulted in about a 0.98% decrease in ridership) found in Hawaii (McLeod et al 1991). In another example, the Mexico City Metro is an inferior good for middle and upper income Mexicans (Crotte et al. 2009). There are many other references, and while rail is sometimes disputed as to whether it is inferior or normal, bus is generally considered inferior.

Obviously there are other effects, in terms of service and fares, that effect ridership, but the macro-economic condition is too large an effect to dismiss out of hand. While it is hard to attribute the particular amount of the fall of transit ridership to a particular factor (econometrics can help, but in the end at best there will be a range of results, not one specific number that people will be able to rely on), it is clear that that a 50% fall in the price of gas could easily explain more than a 5% fall in transit ridership. Similarly a 10% increase in real incomes (a 20% increase in nominal incomes) could explain perhaps a 10%  fall of ridership. Elasticities are measured at the margin, and the changes in the price of fuel are far from marginal, so one can’t be too enamored of a particular elasticity effect, but the directions are robust and clear and not surprising.