On a recent trip to New York, I went through Newark (Liberty!) International Airport. My previous experience here has only been changing planes. It was not a good experience, nearly missing my flight to Paris, (the doors had closed) due to delays on the first leg,  but saved because the second leg was subsequently delayed too, and a quick-thinking ground agent saw me milling about trying to figure out another connection, and reopened the doors.

This time was simpler. The flight was delayed 40 minutes from Minneapolis – St. Paul due to air traffic control (no big deal), and we got in more or less on time, because that’s how big the buffer is now. The terminal was crowded. My plan was to take the train into New York City since I was staying at a hotel near Penn Station (New York). I learned there was also a Penn Station (Newark) which I am sure is needlessly confusing.

So exiting the secure area, and going to ground transport is a long walk. It always seems longer when you are unfamiliar. Nevertheless I figured out to take the AirTrain to the Amtrak/NJ Transit station.

Before boarding AirTrain I purchased tickets at the kiosk, which had a short line, but seemed straight-forward enough (compared to many of these things). The human monitoring people buying tickets from the machines (because??? [because the user interface is bad, because jobs]) kept reminding people they could buy tickets at the actual train station. No one actually left their position in line. 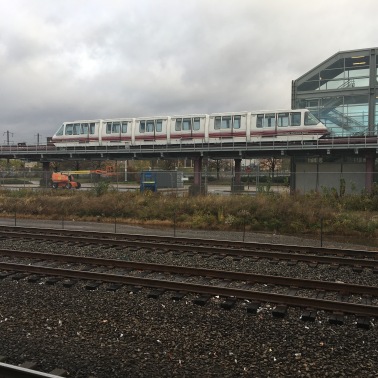 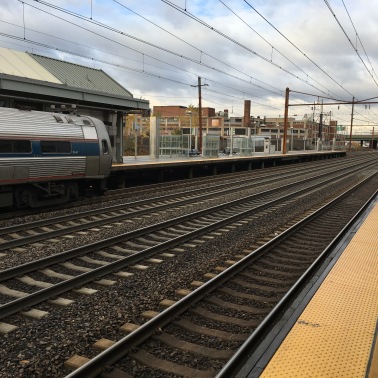 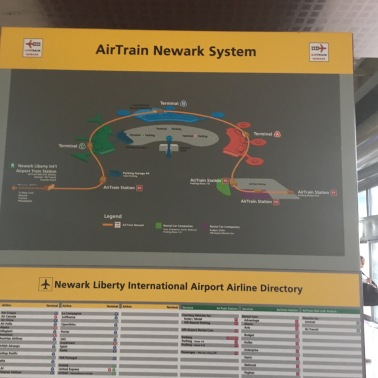 AirTrain Newark System Map (towels by the windows on the side) 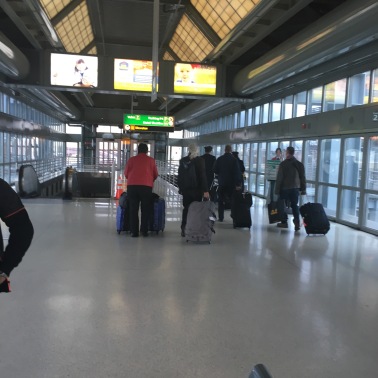 AirTrain, the airport inter-terminal shuttle system (a monorail) had its own issues, not departing for 5 minutes. The station was leaking due to recent rainstorms, the towels on the floor indicating a duct-tape solution to declining infrastructure. We got to the penultimate station, and they ordered us out and transferred to the AirTrain on the other track to make the final leg to the slightly off-airport Airport Station. Once we got there, it was another 9 minute wait for a train, no big deal. Real estate at Newark is not scarce, it is surrounded by  surface rather than structured parking lots. There are plans afoot to renovate AirTrain.

The train ride through the swamps of Jersey, into Seacaucus, and then under the River to Manhattan was sluggish but largely uneventful. There were a few minor delays and stops, but no major problems. There are plans afoot to build a new tunnel under the Hudson.

NJ Transit has its station at Penn Station, but in a separate building from the more (in)famous station under Madison Square Garden. There are a variety of proposals afoot to give Penn Station a more magnificent front end. I remind everyone that arrivals into the city see the backend of the station, not its front.

One day, maybe, maintenance will be taken seriously, and infrastructure will be built, and New York, the city in America most deserving of well-maintained high quality intercity rail will finally get it.