With the recent demise of Car2Go in Minneapolis and some other cities, it is worth revisiting my 2013 post Carsharing is the mode of the future, and always will be. I am a member of Car2Go, which is why I get the attached notice: 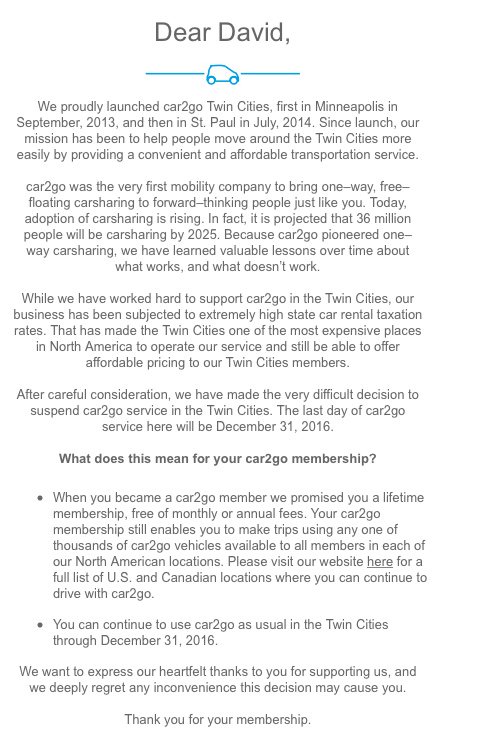 I basically made the claim that this is a network-effects driven business, for this to work, the access costs must be low, generating demand, which will increase vehicle availability (as suppliers respond to demand), which will lower access costs, which will increase demand. Given the idleness of existing Car2Go vehicles (which I have heard are as idle as private cars in Minneapolis), they clearly could have accommodated more customers on the existing fleet. My belief is access costs were insufficiently low to get this positive feedback network effect going here. Perhaps a greater investment would have juiced the market, I am not sure. Gas prices are exceptionally low, the economy is at the peak of expansion, so people readily buy and drive private cars.

The company complains about taxing, and I am sure that is also an element. Clearly carsharing should not be taxed a the same rate as rental cars, which are aimed to extract money from out-of-towners (taxing foreigners living abroad) who don’t vote locally, this is a case of public policy not catching up with changing technology.

Now this might be a particular case of a particular city, Car2Go is expanding in some places globally, but Car2Go has also withdrawn from several other US cities (e.g. San Diego, Miami) and elsewhere (London, Birmingham, e.g.), so that is a fact. Susan Shaheen and Adam Cohen reported that North American carsharing membership appeared to have peaked 2 years ago. What the future holds awaits.

The future of urban transport is complex. That we are moving towards automation and electrification is a pretty solid bet, with some hedging on the timeline perhaps. Whether, when, and where fleet ownership/sharing/renting replaces individual ownership is less so. Certainly Manhattan is the kind of place this will be common, as taxis are already very important. Existing customers can easily shift, as doing old things better is the first step in a new technology. But most of the US is not taxi-reliant now, so is not a mere conversion but a major behavior shift. Doing new things is the second step. While many people certainly believe this will occur, just look at Uber’s optimistic valuation, this is a company that has yet to realize a profit, so it is built on many “ifs”.

As Ben Ross points out, It is worth nothing that Daimler uses Car2Go to meet fuel economy standards (averages tiny cars with Mercedes), so its economics differ from competitors. This leads to a greater subsidy for Car2Go than a typical carsharing platform which is expected to be profitable.