I appeared briefly at 13:oo CDT today on CNBC to talk about Hyperloop, which is in the news because one of the Hyperloop companies (Hyperloop One) had a press release yesterday, changed their name, raised a lot of money, and had a seemingly successful test run today.

They asked me some things on the interview, I gave some answers, it’s all sort of a blur.

This is what I intended to say. These were the producer’s preliminary questions (in blockquote) and my preliminary answers (in bullets).

Let’s start with the assumption that the Hyperloop works as advertised.  What are the potential benefits of a technology like this?  Are there any transportation infrastructure projects – for example, Japan’s high-speed rail system – that are analogous to this type of transportation, or have we never really seen anything like this before?

Let’s talk challenges.  What would have to happen for a private company to be able to run a tube from, for example, Los Angeles to San Francisco?  How difficult would it be to add a hyperloop to America’s existing transportation infrastructure?

Do you personally see this technology being implemented over the next 20-25 years or not? 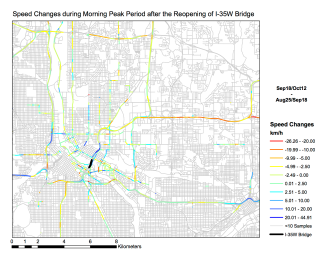 The opening of the replacement for the I-35W Mississippi River Bridge on September 18th, 2008 provides a unique opportunity to evaluate the impacts generated by this additional link on network performance. Using detailed GPS data to estimate travel times on links and for origin-destination pairs, this research finds that while on average travel time improved with the reopening of the bridge, the subsequent restoration of parts of the rest of the network to their pre-collapse configuration worsened travel times significantly on average. In all cases, the distribution of winners and losers indicates clear spatial patterns associated with these network changes.