The Transportationist 13 Most Popular Posts written in 2014 (note some 2013 posts were still popular):

This is out of about 300 posts . Of course you should not just be a dedicated follower of fashion and read the top 13, you should read them all.

David King also started posting in the Fall, so I expect to see his posts in this list next year.

Streets.mn also has a list of popular posts; all my posts for streets.mn are cross-listed here, but tend to get views over there.

Jesse Van Berkel writes in the Strib on transport in: The next big things for Minnesota in 2015

With new bike lanes, rapid busways and expanding light-rail lines, commuters in the Twin Cities have more options than ever.

Transit officials predict growing popularity of the Green Line, which connects downtown Minneapolis and St. Paul. In November, on average, 33,222 people rode the light rail line every day — 10,820 more than the Metropolitan Council had anticipated.

The number of trips and miles people travel in their vehicles has dropped steadily over the past decade, said Met Council planning analyst Jonathan Ehrlich. He anticipates that trend will continue as cycling, walking and other modes of transportation become more popular.

Gas expenditures in 2015 are expected to be the lowest they have been in more than a decade, with the average household spending $550 less than in 2014, according to the U.S. Energy Information Administration.

“Under $2 a gallon again is pretty significant. That could increase the amount of travel people are willing to do,” Levinson said.

I agree on the long term trend with Jonathan, but gas prices have collapsed, and as long as that holds (I will not forecast energy prices, which is a fools errand, except to say the best expectation for next year’s prices is current prices). at the margins people with cars should be willing to use them a bit more, especially for longer trips, and the additional dollars in the pocket should at the margin increase non-work trips like shopping, and thus low energy prices will boost the economy (except for energy producers) which should at the margin increase employment and work trips. So like any good forecaster, I will say the results are contingent on the assumptions.

Peak travel is not over (demographics are more set than anything else, and technological substitutions proceed apace), but mountain ranges are bumpy.

People don’t like Uber’s surge pricing. The case during the recent Sydney siege was especially controversial. Even though it is just an operationalization of market supply and demand (too much demand, too little supply, raise prices), it has problems.

First, it does not appear to have a mirror. When supply is too large, do prices drop significantly below the base? I think what happens is the drivers queue up (virtually).

Second, it seems to come as a surprise. People say “I started off the evening at regular fares, and end up later that evening with only surge prices available”, this seems unfair.

Other ways to deal with shortages include queueing, which is common on roads during peak hours, since we don’t generally price our roads.

There is a third way though. Compression. We can get more people into cars than we typically do. True shared rides, with multiple parties going to multiple destinations  could be the norm at peak times. This is similar to UberPool and LyftLine. This would split some of the difference between higher fares (more fares should lead to more revenue for drivers) and rationing (more destinations should equal more travel time, for at least one party, if not both, or more). There are of course limits to this, but the typical Uber vehicle holds 5 persons (4 passengers) with some compression of passengers in the back seat. While some parties already have 4 people, many are single or two passengers.

Everyone’s favorite Transportation Network Companies might consider this as an alternative to the surge default. 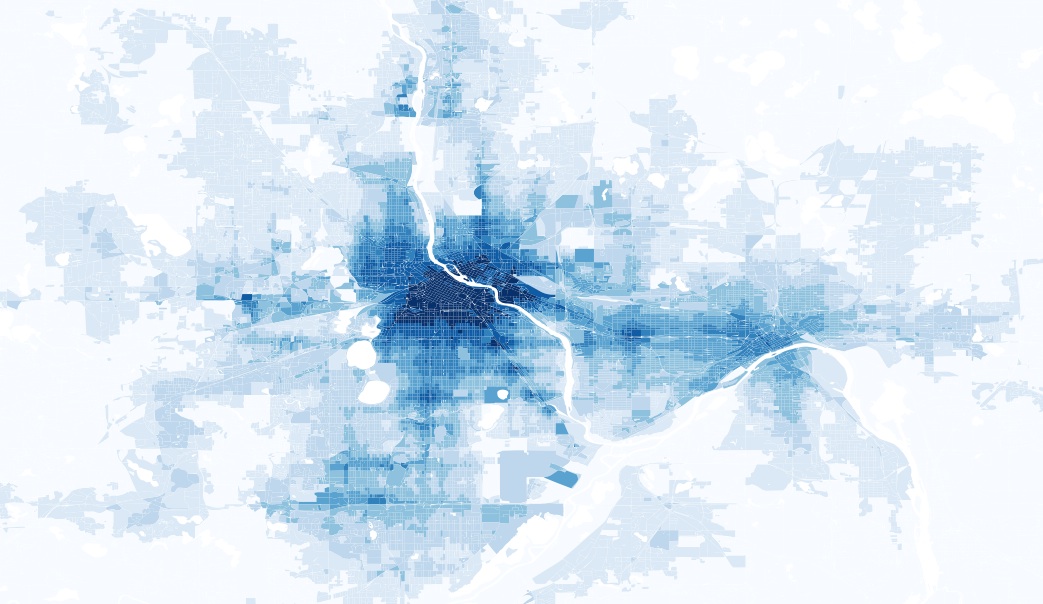 Abstract
This data was created as part of a study that examined the accessibility to jobs by transit in 46 of the 50 largest (by population) metropolitan areas in the United States. It is the most detailed evaluation to date of access to jobs by transit, and it allows for a direct comparison of the transit accessibility performance of America’s largest metropolitan areas.
Related Publications
Andrew Owen, David M Levinson. Access Across America: Transit 2014. (2014). Center for Transportation Studies Research Report. September 2014. Report no. CTS 14-11.
http://hdl.handle.net/11299/168102
Creative Commons License: Creative Commons Attribution 4.0 International License
Suggested Citation
Owen, Andrew; Levinson, David, M.. (2014). Access Across America: Transit 2014 Data [dataset]. Retrieved from the Data Repository for the University of Minnesota, http://dx.doi.org/10.13020/D6MW2Q.

This new pooled-fund project, led by the Minnesota Department of Transportation, will implement a measurement of accessibility to jobs across the entire United States. For every Census block, it will calculate the number of jobs that can be reached, by driving or by transit, within various travel time thresholds. Each pooled-fund partner will have direct digital access to these detailed accessibility datasets. In addition, an annual report will summarize the accessibility dataset for metropolitan areas across the country.

In my family’s quest to visit the county seats of Minnesota, on a Sunday morning in early November we went on a trip to Glencoe, Gaylord, Le Sueur (not a county seat), and Saint Peter. We had never been to Glencoe before, and in all honesty, would find it unlikely to be there again, as our travels generally do not take us that far in that direction.

Glencoe, just past Norwood-Young America and thus 60 minutes Southwest of Minneapolis, is the seat of McLeod County, and is home to over 5600 people. While still mostly white, the Hispanic population is about 15%. It is most famous to the rest of the world as the site of a Louis Malle documentary “God’s Country“.

As with many such towns, there is a Courthouse, a Grain Elevator, churches, a school, a small set of local shops on a Main Street (the main corner I judge to be Hennepin and 11th), including a local cafe (Gert and Erma’s), a Hardware Hank, a bank, a post office, a former bank converted to something else, a local newspaper. There are also specialty stores not found in every county seat, e.g. Therapeutic Attainment Options, offering massage and bodywork, and a local watch store – which Central Place Theory says “should” be in higher order towns. Off the historic main street, but on the road connected to the highway, are the farm implement stores.

Glencoe is off of Highway 212 in an awkward way. [Map] A rebuilt Highway 212 is south of the old gridded town. Some newer suburbs have emerged just south of 212, enabled by the faster accessibility the divided highway brings.

A full set of photos are available on Flickr

Inspired by a hand-written final exam.