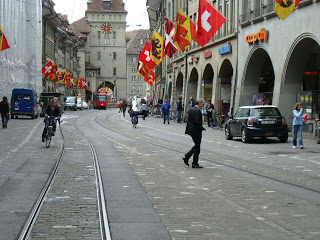 The more you hear the exhortation, the less effective it becomes (diminishing returns set in), much like the security threat warnings of the Bush Administration, telling us at the airport we were at threat level orange, constantly.

People are imperfect. They feel they have better things to be doing then looking out for lurking dangers around every corner. They did not evolve to operate in a city with multi-ton machines operating at speeds faster than the fastest land animals. They see meaningless signs and signals and learn to ignore them. Breaking traffic and pedestrian laws may be illegal, but it is hardly immoral – we don’t feel guilty when we conscientiously don’t allow ourselves to be governed by degrading light bulbs implemented by unthinking bureaucracies.

Designs for systems that involve people should consider human imperfection. Ideally systems are forgiving of human error.  Light rail trains, e.g, are much more dangerous than buses. (Cars are too). They are far less tolerant of imperfection, as they can neither brake quickly (due to mass)  nor swerve (due to tracks), and are more deadly on impact (again due to mass).

There are two good strategies for multi-modal travel within a finite space:

(The third strategy: mix them quickly will lead to tragedy as long as people are making decisions, rather than machines.)

The “keep them separated” strategy is why safety on interstate highways is much better than other streets. High speed vehicles are interacting with other high speed vehicles, but low speed vehicles are prohibited. It is far from perfect, but better than the previous alternative. So much so that when speed limits were raised in the 1980s, overall safety went up as drivers were attracted off much more dangerous roads onto the interstate, which was only marginally more dangerous with the higher speed limit, and now less likely to result in a speeding ticket. Security theater that deters people from flying and encourages them to drive is more dangerous than the original threat.

Newer subway systems (such as the shuttle at  MSP airport between the terminal and the LRT station/parking ramps), have glass barriers preventing people from accidentally falling on the track. Despite running one train every 90 seconds or so for over 10 years, I have not heard of any incidents with this system.

The Minneapolis-St. Paul region has chosen, for the most part, not to build grade separated transit systems. They are certainly more expensive, even if more beneficial (safer and faster). That leaves the strategy of “mix them slowly.”

Proponent of shared spaces, the late Hans Monderman has a famous quote “When you treat people like idiots, they’ll behave like idiots.”

As the song goes “Signs, signs, everywhere signs”. Each sign and signal degrades  the effectiveness of all the others. Monderman went for a sign and signal-free approach, using design to guide people and vehicles through town centers. In this scheme pavements give people the guidance they need.

While peer-reviewed evaluations of shared spaces have been limited, Kaparias et al. from Imperial College, evaluating Exhibition Road, say: “The results suggest that pedestrians feel most comfortable in shared space under conditions which ensure their presence is clear to other road users – these conditions include low vehicular traffic, high pedestrian traffic, good lighting and pedestrian-only facilities. Conversely, the presence of many pedestrians and, in particular, children and elderly, makes drivers feel uneasy and, therefore, enhances their alertness.”  Subsequent research by the team finds “The results of the comparative analysis indicated a general decrease in traffic conflict rates as a result of the redesign but also highlighted specific issues that may require additional analysis”

Karndacharuk et al. write: “A comparative analysis of the data after implementation highlights the importance of the active frontage in enabling a lower (vehicular) speed environment in relation to the number of pedestrians within the shared space.”

In short, design matters. Over-engineering can be as great or even greater sin than under-engineering. The best design is not necessarily more gadgets, instructions, rat runs, prohibitions on actions, closing of desire lines, or other devices constraining people from their intuitions.

Rather it is running with and shaping travelers natural instincts, so the environment is not chafing but accommodating. Safety is a shared responsibility, and those who diminish the effectiveness of safety tools such as signs and signals by their misuse and excessive exhortations which loosely spend people’s scarce attention are culpable as well.