Houten, building on an old settlement, was initially planned as a city of 30,000 people where local transportation by bicycle is prioritized. Constructed from the 1960s onward as a reliever for Utrecht, it is connected by a short rail line with two stops in the town. Cars cannot cross the town, but can circumnavigate on a ring road (see attached map). The industrial and commercial sector is in the southwest of town, with good highway access. Though there is a good balance of jobs and workers, most residents work outside the town and most workers commute in, which is not surprising given its good connection with the rest of the Randstad. The architecture and feel of the place is otherwise very familiar to anyone who has visited a planned US, French, or UK new town from the same era (without the single family homes, most of the buildings are townhouses or apartments). Some 89 photos, mostly of Houten, can be seen on Flickr.

We toured it on bike one afternoon during the WSTLUR conference. (You may spot famous transportation educators in the photos.) Thanks much to the local officials who gave us the tour. These are my observations:

1. The center of town is the main train station (which was recently rebuilt). The number of tracks were increased and the station was elevated so it was easier to cross east-west. 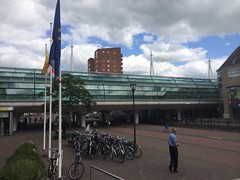 2. Under the train station is an enormous bicycle parking facility: Fietstransferium. 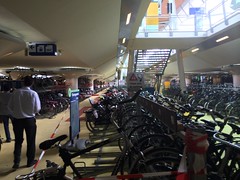 3. There are many bike paths through town. Small humps are used to discourage cars, which are prohibited, and motor scooters and mopeds, which are as well, but seem common. 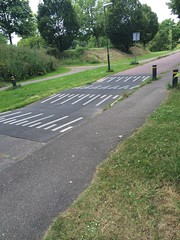 4. The best, most vibrant part of the town is the old town, indicating there is much planners need to learn about recreating places. 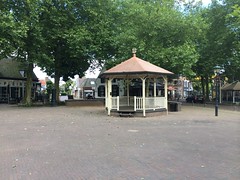 5. There are some shared roads, though most prohibit motors officially. 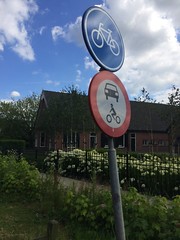 6. The newest part of town is centered on Castellium, inspired by a Roman town. 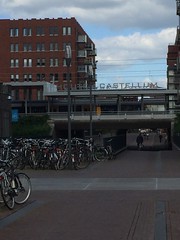 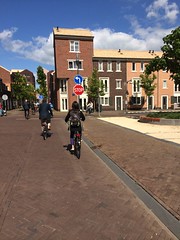 7. One development is inspired a Norwegian Fjord town 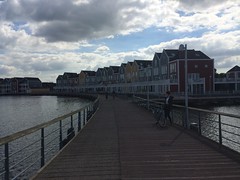 Some of my colleagues felt the town too “sterile” which is the rap given to new towns, and especially suburbs, everywhere. I don’t know what people are looking for, hypodermic needles on the street? It is of course a suburb of Utrecht, so the core city functions – especially entertainment and culture, will agglomerate there, as cities are where the childless youth seek to find mates. To conduct pop psychology and apply two of the Big Five personality traits this is a classic case of a trading off Openness to new ideas, which involves exposure to risk, and cities, and Neuroticism, which is fear based, and wants to minimize risk, and seeks more controlled environments (loosely, planned communities or suburbs), which I suspect at some level is in part correlated with age and parenthood.