Rotterdam is one of the world’s great ports. It is also a center of modern architecture, owing in large part to bombing during World War II by the Nazis. Today, Rotterdam – The Hague area (including Delft) has 2.9 M people, and so is comparable in size with Minneapolis – St. Paul. Rotterdam is about 25 km from The Hague (but only 15 km from Delft (about the distance from Minneapolis to St. Paul)). Yet unlike the Twin Cities, there are farms between the cities, the Netherlands has done much to preserve its Green Heart. This undoubtedly drives up land prices in the developed areas, and makes it more difficult to have US-like suburbanization. In general the cities of the Netherlands are not as dense as the densest parts of US cities such as Minneapolis, but the “urbanized areas” are much denser than the least dense parts of those same metropolitan areas.

Some 239 photos, mostly of Rotterdam (some of the Delft train station on the way to Rotterdam), can be seen on Flickr. Selections are below. 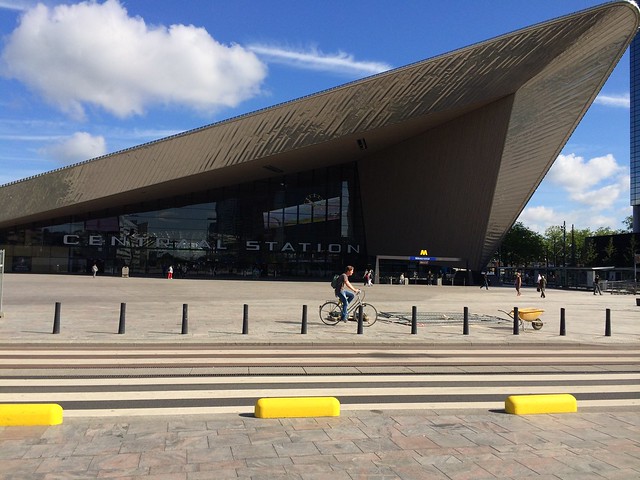 1. As in Delft, and Vienna, and just about everywhere else in Europe, there is a new train station. Rotterdam Centraal Station just opened, and the interior of the station is nice, and the exterior clearly exudes futurism. The plaza in front of the station is too large for my taste, and seems unprogrammed. There is a very large parking garage (ramp) under this plaza. The parking entrance echoes the train station. 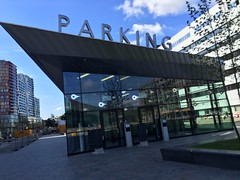 2. The public transit is excellent, there are modern trams on the major streets. There is also a modern subway, and a new LRT connecting to Delft (as well as the intercity train), thereby providing both local and express services. 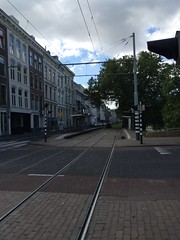 3. There are many pedestrianized streets. This is true both in the older areas as well as some newer developments. Absence of cars has not obviously hindered retail sales. 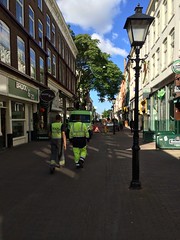 4. It seems as instead of hauling wet cement trucks through the city, the require construction to make it onsite, and thus only have to haul aggregate, and letting the construction firm mix local water. This reduces wear on the streets from some of the heaviest vehicles around. 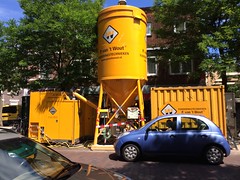 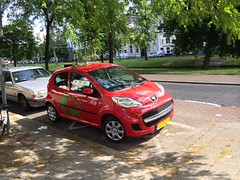 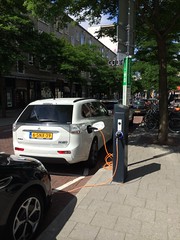 7. Cycling is popular (relative to the US), though not as popular as Delft (see upcoming posts). Bike parking and Cycletracks are common features in the environment (also, hopefully unrelated, the ad seems to indicate that prostitution is legal.) 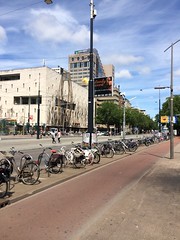 8. They try to make use of the area under bridges and viaducts, in this case for a trampoline. Notably the trampoline was being used and had not been obviously vandalized. 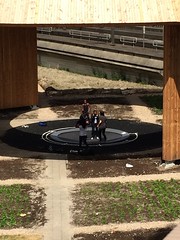 9. Attempts at creating a roundabout on a local shopping street using simply paint and brick patterns did not seem to succeed. 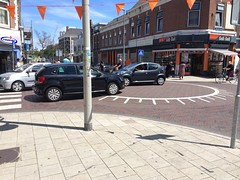 10. The sidewalks are often continuous elevation across streets (i.e. there is no cross-walk, there is a cross-drive). This helps remind drivers they are entering a woonerf. Drivers must slow down since they are crossing the pedestrian right-of-way, rather than vice-versa. If there is one thing I could do to American residential neighborhoods, it would be implementing the woonerf. If there is one thing I would build to tell drivers they are in woonerfs, it would be this sidewalk extension across the local street (when it joins a major road) as a way of signaling to drivers they are in a new space> This is far more effective than signs or changes in pavement surfaces alone. (To be clear, “complete streets”, while better than incomplete streets, are not woonerven, despite what wikipedia says.) 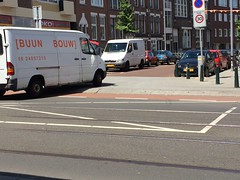 11. There are lots of wayfinding aids, moreso in the Museum Quarter. (Sadly museums are closed on Mondays). 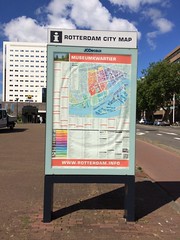 12. Even though museums are closed, public art is pervasive. 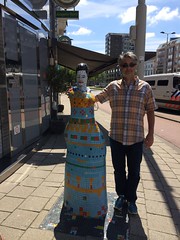 13. The Dutch are excellent at waste removal. Putting trash in the receptacles in the first place is a bit more difficult. Note the receptacles are atop larger subterranean canisters, and will be sucked out with giant vacuum like devices. 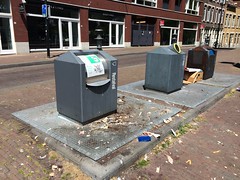 14. Ducks establish small well-defended Duckdoms on little islands in the canals (atop some type of pipe). 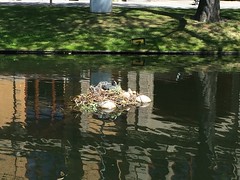