ThinkProgress has an article about road pricing: Cars Are Getting Greener. Here’s A High Tech Alternative To The Gas Tax.. They quote me about Minnesota’s Gas Tax and I-35W:

“Like the rest of the country, Minnesota’s gas tax barely made a dent in the costs to repair the state’s abysmal infrastructure. Attempts to raise the state tax repeatedly failed in the legislature, in large part because the state’s Governor at the time, Tim Pawlenty (R-MN), had pledged to veto any tax increases whatsoever. That extra revenue might have generated more money to inspect and repair the I-35 bridge and others in similar condition. But since the Minnesota gas tax had not been raised since 1988, David Levinson of the University of Minnesota noted, ‘its purchasing power had diminished significantly, while the network was expanded and aged, and traffic levels increased.’

‘There [were] actually several proposals that year to do some repairs on that bridge,’ Natale said. But the legislature ‘defeated that. They just didn’t allow it to happen. The end result is, how much money did we spend replacing the bridge, and how many people were killed?’

The I-35 catastrophe rattled lawmakers’ attitudes. Sen. Amy Klobuchar (D-MN) called the bridge disaster a ‘wake-up call’ to raise the alarm over infrastructure deficits all over the country.

Even Pawlenty wavered. ‘After the bridge collapsed, he initially said that we need to do something about the funding for inspections and repairs,’ Natale said. ‘That was what he said day 1. On day 4, he said, well we can fund this if we can find other things not to do.’”

I recently spent a week in Delft for the WSTLUR conference. My visits to Rotterdam and Houten are detailed in other posts.

As a place to consider the relationship between transport and land use (the mission of both WSTLUR and streets.mn), Delft provides an ideal place that should be used as a model for emulation by planners.

Like most travelers I arrived in Delft via train (from Schiphol Airport). Aside from payment issues that Americans face due to lack of PIN and Chip (which will be rectified in 2015), train is extremely convenient, running on a frequent intercity schedule, even at 6:30 am on a Sunday morning, even with works being undertaken. It is a little bit confusing for the non-Dutch speaker, especially when certain trains don’t follow the printed schedule, but the electronic message boards will state which trains go to which destinations. However while the platform is usually given, the track may be dynamic, so pay attention. In any case, you can just ask a native (they are taller than you), almost all of whom speak English. 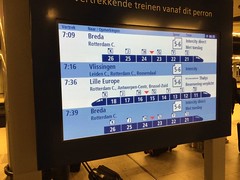 On the train it is even simpler. 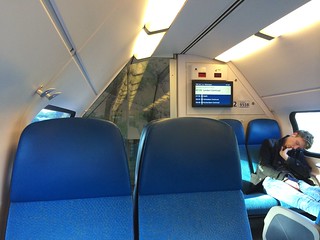 Delft has an old railroad station that has seen better days. It is near the Tram Line, but due to works, the exit path is a bit circuitous. 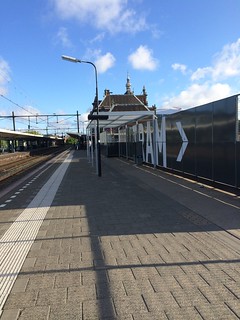 The new train station will be open soon, I am not clear if they are adding tracks. 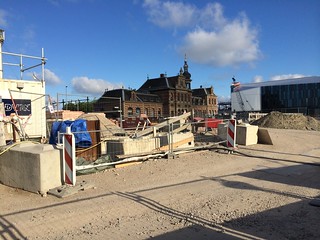 Lots of bikes park at the station. 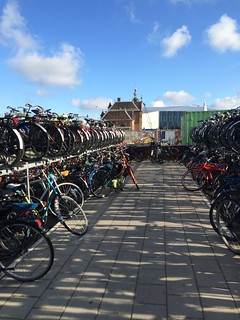 Along just about any street of importances, where bikes are cars don’t share space, bikes have dedicated, separated cycle tracks, lanes parallel to, but separated from, the adjacent motor vehicle lanes. These cycletracks, and the bike trails in general, are also apparently open to mopeds and motor scooters. Sometimes it is separated by short concrete barriers that allow water to flow. These appear to be retrofits. 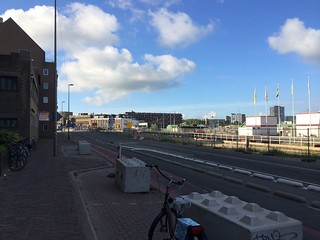 The separation is often done by vertical rather than horizontal spacing, that is, the cycle track is immediately adjacent to the roadway, but elevated maybe 10 cm. 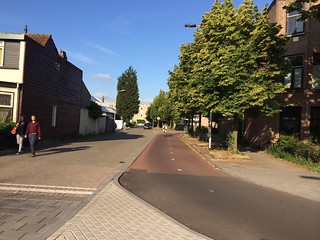 Cars are allowed for residents, but retractable bollards keep non-residents and unauthorized vehicles from driving and parking on local streets. (Some tour buses seem permitted as well). 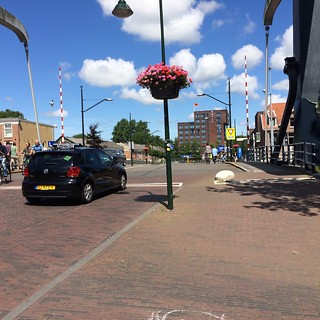 The canals define the city. 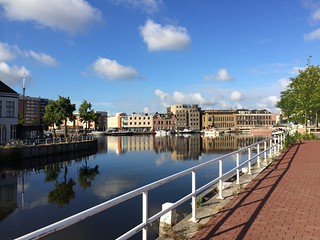 There are pedestrian/bike/motorbike tunnels that are widely used despite US fears of unsafety and graffiti. 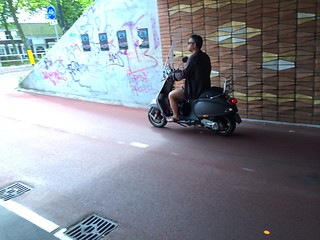 The tunnels themselves may be below sea level 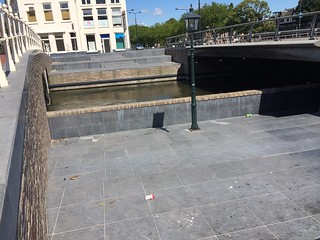 The town square (the Markt in Centrum) is programmed with lots of activities on the weekend. On Sunday it was innovative environmental technologies … 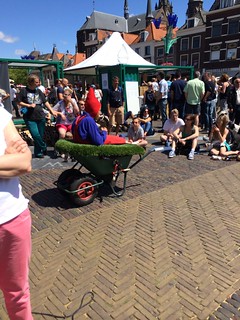 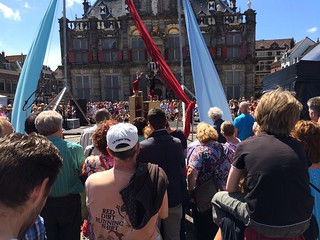 Another square (De Beestenmarkt, where various beasts were once traded) is home to outdoor drinking and dining. 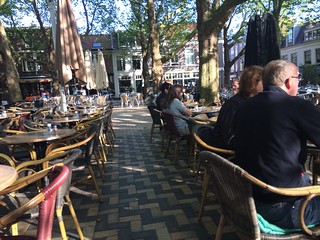 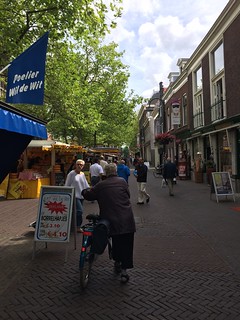 The public transport buses in town are contracted out to a private company Veolia. 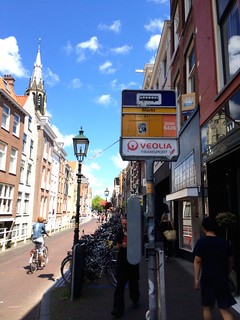 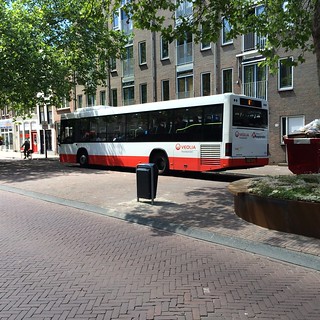 In many places, there are shared spaces, including both commercial districts, 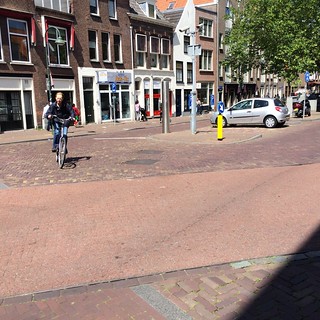 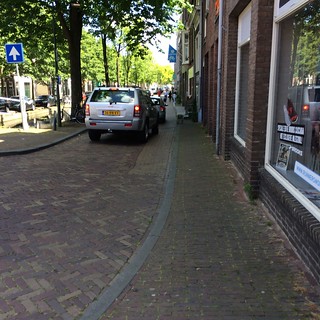 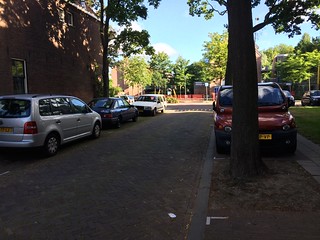 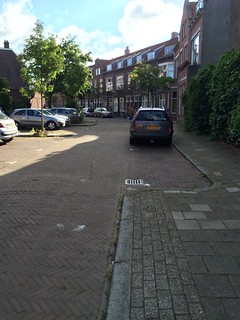 Delft is a tourist destination in its own right, and adjacent to a major university: TU Delft, thereby generating additional demand.
The campus of TU Delft is getting a tram, but in the meantime relies on bus. 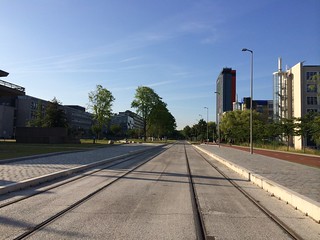