The most important new connection between downtown Minneapolis and points East since the Green Line is about to open. I speak of course of the connection to the tunnel under I-35W at Bluff Street Park.

Riding a NiceRide bicycle from Williamson Hall, I went from the University to the Dinkytown Greenway, and crossed the Number 9 Bridge. 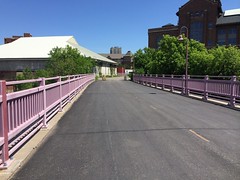 There I found myself riding across the orange plastic netting which had collapsed to the ground, went into the tunnel under I-35W at Bluff Street Park. 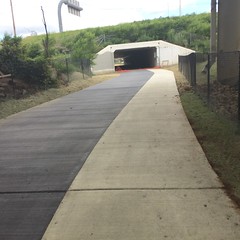 After the tunnel I rode on the completed sidewalk (rather than the still under construction bike path) and found myself in the Mill District near Izzy’s Ice Cream and the Guthrie Theater. Who knew the University and Downtown were so close? [You can see the area for the soon-to-be-ribbon-cut tunnel in the pink box on the adjoining map] 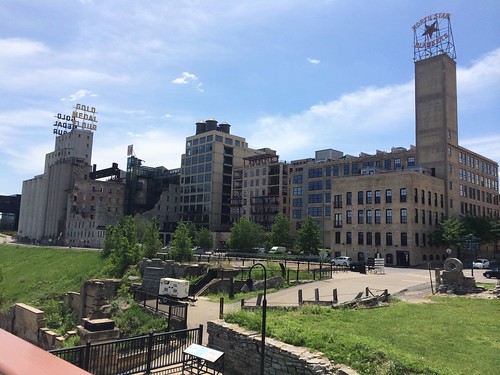 I then moved over to West River Parkway, and rode to the Stone Arch Bridge, and crossed the River again. There I found myself in St. Anthony Main. This is both really close to downtown and really close to the University, but the connection with the latter is weaker than it should be. 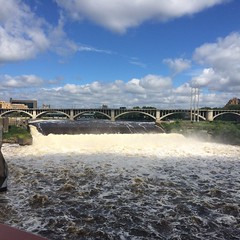 I rode from St. Anthony Main to try to rejoin the Greenway. At first there is what seems like a private (though paved) road or driveway. 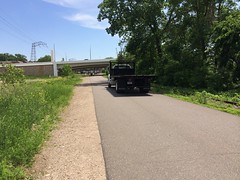 But then I was back in the early 20th century, on about 100m of railroad tracks and dirt road. Google thinks its a street. Perhaps it is. It just isn’t paved. I felt I wasn’t supposed to be there. 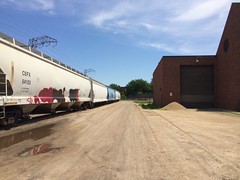 Where it soon meets up with the Dinkytown Greenway. 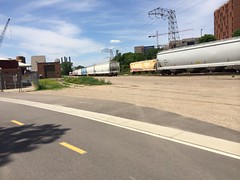 I then continued on the Greenway until its awkward connection with Dinkytown, 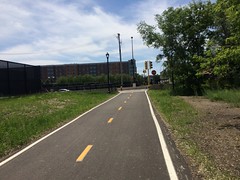 I rode along some of the lower volume streets there, and dropped the bike at the local NiceRide station. (University and 4th both need Cycletracks). 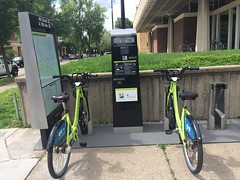 Seriously, a bikeway between the University and St. Anthony Main is technically such an easy thing to fix. (I know, railroads), and it is appalling that such an obvious connection remains missing from the network. Doing something in the Dinkytown Trench was Voted in 2012 as Best Opportunity to Do Something Useful. While a section of the Dinkytown Greenway was completed, much of the Ditch remains an uncaptured opportunity. Granary Road has been discussed for years now, where is it? We could run a mostly grade-separated transitway in the Ditch (and along the Campus Transitway) connecting Downtown, Northeast, St. Anthony Main, the University (both campuses), and Roseville (see the northeast Purple Line here).

Getting back to the immediate question, connecting the U with St. Anthony Main via a trail, really why do we make such simple things so difficult for ourselves? There is an unused corridor. There is an unmet need. I don’t understand why the whole thing (Granary Road +) needs to cost $63M when local roads can be built for $2M per mile and paths for $0.2M per mile, and this is hardly 30 miles. (Note Bluff Street Trail was $3M, also quite pricey.) I have long talked about how transportation costs too much, but this is such a rich example. Cost is used as an excuse not to do anything, but the cost itself is never challenged. Surely we can do better.

I promise not to turn this into a bike blog, since there are so many in Minnesota already.