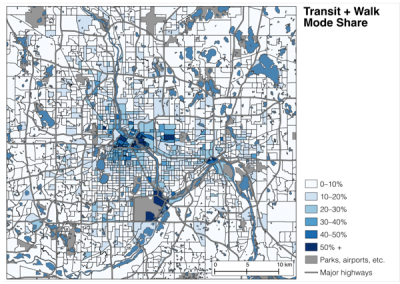 This paper presents the results of an accessibility-based model of aggregate commute mode share, focusing on the share of transit relative to auto. It demonstrates the use of continuous accessibility — calculated continuously in time, rather than at a single or a few departure times — for the evaluation of transit systems. These accessibility calculations are accomplished using only publicly-available data sources. A binomial logit model is estimated which predicts the likelihood that a commuter will choose transit rather than auto for a commute trip based on aggregate characteristics of the surrounding area. Variables in this model include demographic factors as well as detailed accessibility calculations for both transit and auto. The model achieves a ρ2 value of 0.597, and analysis of the results suggests that continuous accessibility of transit systems may be a valuable tool for use in modeling and forecasting.

This is based on Andrew Owen’s Master’s Thesis.

It has been noted that there is a very short time between Hyperloop capsules arriving at the Hyperloop station. This potentially makes boarding and alighting difficult, since there is no guarantee everyone will take their seats and be strapped in before the next capsule arrives. This requires either the following capsule to deploy its emergency brake (with bad consequences), or the main capsule to depart without everyone properly strapped (with bad consequences). Even with handlers like a ski-lift, this is less than optimal.

There is a simple solution for this. Pre-load passengers into removable chairs, and then automatically load the removable chairs into the Hyperloop passenger capsule. The pre-loading can take as much time as required, be conducted offsite at the station, with many parallel removal chairs loading bays, and assures that the main infrastructure is fully utilized.

Would it slide horizontally into the Hyperloop capsule, or be loaded aerially?

The removable chair loading system would have multiple switches, so if a capsule were not ready, the next one could be loaded into the system. 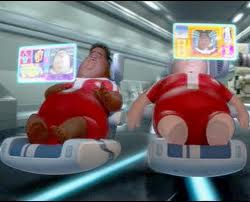 In other words, the chairs should not be built into the passenger capsule (as drawn in the alpha-proposal, reproduced here), but into a removable unit. This unit would be robotically unloaded and offloaded.

It is much like removable car seats for babies, with the parents replaced by robots. Or like the chairs in Wall-E, with the chairs physically grounded, and then loaded into the Hyperloop passenger capsule.

I hereby open-source this idea, and don’t have time to develop it further as I am busy with other activities.