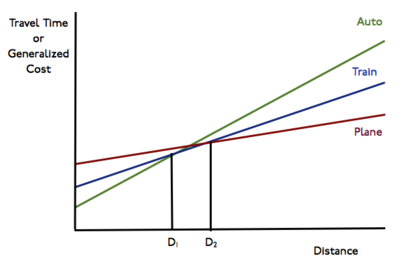 Maps are powerful ideas. A map once drawn can be viewed as a contract, a promise to build something. We live with the ghosts of maps drawn long ago. Unbuilt highways queue-up to get built, even when their rationale has disappeared. But lines remain unbuilt for a reason, people perceived the benefit did not outweigh the cost. Of course, conditions can change, a line which once failed a benefit-cost test may now pass it, or vice versa.
High-speed rail advocates have long assembled maps of proposed routes. I have a collection of them here. These all present different visions of the future, and they can’t all come to pass. But does that mean none of them should?
A private firm would build high-speed rail if the expected profits exceeded the expected costs. Clearly that is not generally the case in the United States, otherwise we would see more evidence of this. There are certainly proposals, some farther along than others. The most likely right now appears to be the All Aboard Florida project. I hope it succeeds.
The public sector remains uninterested in profit, but instead should favor the more ambiguous general welfare. High-speed rail makes sense when the full economic benefits outweigh the full economic costs. The potential benefits include time savings for travelers, increased reliability, improved quality of service, reduced congestion on roadways and at airports, reduced pollution from automobiles and airplanes, and more economic activity as a result of the improved accessibility. The potential costs are those of constructing the system, operating it, the pollution costs associated with construction and operations, and so on. The evidence is that the capital costs of the new system do not outweigh potential reductions in pollution.
The first map nicely draws with bright colors a possible United States High Speed Rail System. The second map, from Streets.mn blogger Mike Hicks, shows actual Amtrak ridership today. Actual ridership is highest in the Northeast corridor, where the Acela service, along with other conventional passenger rail runs today. The other big Amtrak markets are between San Diego and Los Angeles, between Sacramento and the San Francisco Bay area, between Seattle and Portland, and between Chicago and a variety of midwestern cities, in particular St. Louis.
Corridors that get traffic now with relatively slow service are more likely to get higher levels of demand when upgraded (made faster and more frequent) than corridors that get almost no ridership now. This argues for (1) incremental upgrades where the benefits outweigh the costs, (2) focusing on specific proven markets rather than trying to connect random large cities.
We should be looking for routes where train is more cost-effective than either driving or taking an airplane. This distance is certainly less than 600 miles for most of the US, under current costs of travel. (Once we have proven we can connect large places closer than 100 miles, we should connect large places less than 200 miles, and then expand outward. We should not start with a grand vision which will simply collapse of its own weight). We should also be looking for routes with large trip generators at either end.
Examining the first map shows a lot of non-sensical routes. I can’t rate them in order of nonsensicalness, some are just too problematic.

This is not to say there are not segments which could productively be (and are) served by rail. The Northeast corridor is one. Chicago to Milwaukee is one. Los Angeles to San Diego is one. There are a few others. The key point is they are local serving, and should be locally supported. There is no need for US federal involvement. If the projects are worthwhile, the states and cities and private railroads should fund them. Almost all the benefits are local, the costs should be borne by those who benefit.
These segments can grow into systems that should be (1) separately organized, managed, governed, and operated to improve local responsiveness and reliability, and (2) allowed to evolve organically based on incremental changes and extensions. We do not ask San Francisco’s BART to interline with Washington DC’s Metro, nor should we expect a useful local service from Chicago to Champaign-Urbana to interline with a potentially useful route from Richmond to Washington, DC. By doing so you create dependencies (a blizzard in the Northeast holds up train service in Illinois) without any advantages.
High-speed rail is a difficult proposition to begin with in the United States. In the 50 years after it was opened in Japan, it has yet to come to pass in the US. There are reasons for this, beyond simple political obstinacy. The markets are different, the conditions are different (when HSR was opened in Japan, its airlines were highly regulated, e.g. Further, Japan has a much higher overall population density.) The US has been unimpressed with its passenger rail service for many decades (since well before Amtrak was formed to pick up the pieces of private passenger rail service), and has lost its rail-building and train-building skill-base.
When we study successful technologies and networks (e.g. The Internet, the London Underground), we see they grow from a seed, and expand outward – not from the top down. This is natural, it is risk-averse, it allows learning to occur before over-building. Not all technologies or networks will succeed, it is best to learn that early than after building a giant White Elephant.