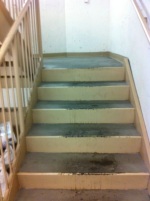 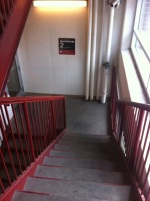 There are lots of social engineering messages to get people to take the stairs instead of the
elevator. I normally do this if I can, and agree that it is probably healthier (though the energy  savings is small).

However, the state of our stairs is disrepair and disgrace. Many of our buildings were not designed for this new trend, and stairs seemed to be only intended for fire emergencies.
To wit, some pictures of my favorite staircases, which I use regularly at the University of Minnesota. Clearly no one has got the message that stairs should be at least as attractive as elevators, even if they are fire emergency stairs.The first photo is a staircase at the Washington Avenue Parking Ramp (Garage for those outside the Midwest). It is at least painted, and has windows, but one would hardly call it nice. It functions not just as a transportation corridor for people, but also for drains, making it easy to service, like your utility room.
The second photo is from the same building, but a different staircase. Not even as attractive as the first. Without windows or natural light, not carpeted nor tiled, the walls painted with an undifferentiated institutional color.

The third photo is from the Civil Engineering building, this is a side entrance, not intended by the architects as anything but for service, yet it is the fastest way in and out of that highly circuitous building from the south and it gets a lot of traffic.

Compare this with your most recent elevator ride. If it was the CE building, it was admittedly equally decrepit, but the elevators there are under repair. In other buildings, the elevator is usually a much a nicer ride. Why?

Cross-posted at streets.mn: There’s no business like snow business :

Snow is a popular topic in the Great White North. Julie wrote A Salute To Snowy Streets, while Reuben discovers What snow teaches us about roads .

I had a media inquiry a year ago on “Why we become such bad drivers when it snows”, I didn’t take it, but the question is interesting in a sense. Unlike the rain in southern California, it always snows in Central Minnesota, so this is a recurring question.

Several things happen when it snows:

1. Roads are slipperier and require longer braking distances. People recognize that roads are slipperier and give increased spacing (following headway in the jargon) to the car in front. Instead of following at a 2 second headway (remember the 2 second rule from Driver’s Ed), they may follow at a 3 second headway. Since there are 3600 seconds in an hour, a 2 second headway implies 1800 vehicles per hour (traffic engineers will note of course that capacities per lane on freeways are often greater than this in good conditions, implying a shorter than 2 second headway). A three second headway implies a service flow or capacity (Qmax) of 1200 vehicles per hour. If the underlying demand (those who want to use the bottleneck at that time) remains unchanged at 1800 vph (say it snowed surprisingly in the middle of the day), then instead of serving 1800 cars, a bottleneck would serve only 1200 in an hour. This implies a queue 600 cars long. That is non-trivial.

3. Roads are slipperier. People insufficiently recognize that roads are slipperier and instead of giving increased spacing choose to crash into the vehicle in front of them. This temporarily reduces capacity to zero as the drivers sort out the situation.

Khattak and Knaap “significant increase was observed when winter snow event injury and noninjury crash rates (crashes per million vehicle kilometers) were compared with equivalent winter nonsnow event injury and noninjury crash rates. The data were then analyzed for injury occurrence. Results of a logit model indicated that crash injury occurrence on Interstate highways in Iowa depended on traffic, road geometry, and number of vehicles involved in a crash. Another finding from the logit model was that crashes during snow events were less injurious compared with equivalent nonsnow event crashes. Snow event–specific crash data were then analyzed to study the effects of snow event elements (e.g., snowfall intensity) on injury occurrence in vehicular crashes.”

4. Snow does in fact reduce demand. People choose not to go out when it snows. Arthur Huang and I conducted some research on Minnesota travel patterns statewide and found these elasticities (so if it snows, there is a 5.9% reduction in demand and 63.9% increase in crashes in the 3am to 9am time period). The reduction in demand seems to be less than the reduction in capacity, so queueing increases on roads at or near capacity in the absence of snow.

Others have found significant results as well:

Datla and Sharma “The commuter roads experience lowest reductions in traffic volume due to cold (up to 14%) while the recreational roads experience highest reduction (up to 31%). Impact of cold on off-peak hours (-10% to -15%) is generally higher than peak hours (-6% to -10%) for commuter roads and an opposite pattern is observed for recreational roads (peak hour reductions of 30–58% and off-peak hour reductions of 18–30%). A clear indication of reduction in traffic volume due to snow is also observed for all types of highways.”

So I wouldn’t say we become bad drivers. We are bad drivers, we just reveal it when the environment changes to the unexpected.

(This presents one more argument for robot cars. They can’t overcome the physics of braking distance or eliminate congestion, but they can in principle better assess road conditions and be less likely to crash.)

Datla, Sandeep, and Satish Sharma. “Impact of cold and snow on temporal and spatial variations of highway traffic volumes.” Journal of Transport Geography 16.5 (2008): 358-372.

Smith, Brian L., et al. “An investigation into the impact of rainfall on freeway traffic flow.” 83rd annual meeting of the Transportation Research Board, Washington DC. 2004.
Streets.mn is a non-profit and is volunteer run. We rely on your support to keep the servers running. If you value what you read, please consider becoming a member.