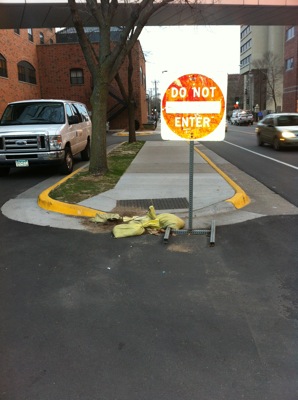 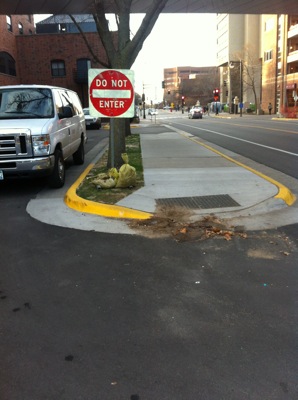 On my usual commute home, I have recently faced this (left image) Do Not Enter sign on the west entrance of the newly remodeled and rebranded The Commons Hotel (Harvard just north of Washington Ave). The sign, aimed at convincing drivers not to enter the drive way the wrong way, was placed in front of the sidewalk curb cut, sandbagged so it did not blow down. I asked staff of the hotel about it (made him come out and look), and while quite gracious, he said it was the University of Minnesota’s doing. He promised to call them. Two days later, nothing had happened. I don’t know if he didn’t call, or if he was routed to the University’s Department of Sidewalk Operations, Obstruction Division, Do Not Enter Unit, and they did not do anything. A sign in the middle of a street would have been moved.
You might say, just walk on the other side of the street. But cars disgorge from the Washington Avenue Ramp, and it is even more unpleasant. Or walk around it (which I did), but that is inefficient for all concerned, and impossible for wheelchairs, who are forced into the street or driveway.
I moved it myself. Why does that feel illegal? I hope the rain or something else takes care of the loose sand.
Surely there is a better design to convince drivers not to go the wrong way on a one-way driveway than an ugly sign, though it might require some concrete. We need better self-explaining roads and driveways.

One thought on “Sidewalk Obstructionism”