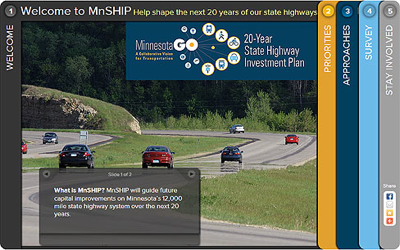 “As part of the plan development process for MnSHIP, MnDOT developed an online interactive scenario tool. The purpose of the tool is to facilitate more public input on MnSHIP’s investment approaches and priorities. The tool allows for public participation for those who cannot attend a stakeholder engagement meeting or for those who prefer to share their opinions online. Users can tell MnDOT what their priorities are for the state highway system, choose which investment approach they prefer, and view outcomes associated with each approach.”

People talk about fiscal stabilizers and money supply rules. We should have a tax rule.

When the economy contracts, there is an automatic stabilizer in that federal government revenue drops. But this is insufficient to fully offset the economic decline. Thus Congress and the President rush to pass or extend tax cuts. But this is a couple of quarters into the recession, and is a very crude response. Further it either expires at some point in the future, or has to be reversed with a politically difficult tax increases.

The auto-stabilizer I propose is to systematically and automatically contract (and increase) tax rates to better absorb the loss and balance the budget in the long run.

Suppose the size of the federal government averages 20% of GDP over time (G = 20%). Over the long term, government spending should equal government revenue. (There is the alternative to inflate  out of debt, but assume this is not an option.)

Imagine we start with a single flat Value Added Tax (VAT) of 20% as the baseline. I use the VAT because it is easy to explain, does not involve marginal rates, and so on. The same idea could be applied to an income tax, or progressive income tax, but it gets complicated, and that is not a virtue.

If GDP contracts by 1% (D = – 1%) , the VAT might contract from 20% to 19% to counteract it. Let’s say spending dropped from $100 units to $99 units, keeping the tax rate flat lowers government income by $0.2 from $20 units to $19.8 units, but lowering the rate to 19% contracts government income by 5%, absorbing all of the loss. This stimulates demand by leaving money in the pockets of taxpayers/consumers.

The exact multiplier can be determined, depending on the elasticity of demand to tax rates and so on. If we want to dampen recessions quickly, we cut government revenue 100% in proportion to the change in the size of the economy (i.e., the adjustment factor A = 1). If we want to dampen more slowly (and maintain more government revenue), we can dampen by G*D. So long as D < G, we can dampen up to G. However, the risk is that government revenue goes to zero if we try to absorb all the loss on the government side. If GDP contracts by more than the size of government, the government has to borrow for all operations.  In the extreme, an algorithm might not just reduce taxes to zero, but produce a negative tax. If the VAT were -3%, for instance (due to say a 23% contraction in the economy), everything would be on sale by 3%, a sale paid for by the government by borrowing from the future. This is akin to Friedman’s negative income tax.

When the economy expands, the VAT would increase proportionately until the point that it assured a revenue stream which would pay off the national debt in N years (e.g. N=30). So taxes would rise until they paid for operating costs of government, plus interest on the debt, plus pay down the debt over time. Again the exact amount depends on elasticities etc.

There would be a quarterly update to the VAT rate based on a formula such as above.

The political economy might be tricky, since we are taking tax rates out of the hands of politicians. On the other hand, responsible politicians who don’t want to vote for tax increases would not have to, since there would be a formula in place which accomplished the main policy objectives of the tax code, raise revenue and act as a counterweight to the economy in general. If government spending rose above the 20%, the tax rate increases phase in to establish a new equilibrium at a higher level, since the rule requires enough revenue to pay off the debt in N years. Budget increases would automatically be captured by a higher tax rate with this rule in place. If the economy expands faster than government spending, the budget would have to eventually be in balance.

Once in place, we would not need active government stimulus spending policies, since that could be done within the tax code. (Nothing prevents Congress from voting for those, but they would add to the long term debt. If a complete stabilizer were used, i.e. government revenue dropped by the entirety of GDP, any spending stimulus would be over-stimulative. If a less than complete stabilizer were used, than spending might be useful.) This does not consider existing federal spending programs like unemployment insurance which have stimulative effect, and might be a justification for using A < 1 in the tax rate adjustments.

Of course, if the economy completely collapses due to unexpected shocks or a breakdown of trust, there isn’t anything the tax code can do to prevent it. But it might reduce the possibility of collapse, and is likely to better handle the run-of-the-mill business cycle (or even a severe shock), which can be dealt with directly, in near real time, through the proposed mechanism.

This would be better with a capital budget, so that N_capital might be 30, but N_operating might be 10. But the gist of the concept is above.

In practice, we may never pay off N, since recessions get in the way, but hopefully by being legitimately on the path to paying off N, there is confidence in the system, that we are on the right path, and government borrowing costs remain low.

I think it might encourage taking things off the consolidated budget, i.e. establishing separate budget streams for different items (social security has a separate funding and spending stream, as do highways (at least “did”, once upon a time)). So long as those independent systems are balanced over time, no problem. We can think of them as separate organizations responsible for specific taxes and specific spending objectives.

Along with the quarterly estimate of GDP, there would be a calculation of next quarter’s tax rate. If GDP is up, and the budget is not in balance, tax rates go up, dampening exuberance. If GDP is down, taxes go down, dampening the reaction.

N= number of years to pay off debt

one can make appropriate assumptions about interest rates, inflation, discounting, I am dealing in Net Present Value Terms here.

I am not a macro-economist, which I am sure is obvious. I have not seen policy discussions of a logic similar to this though. I am also sure there are more sophisticated ways to frame this, which account for the complexities of what is income, on what basis taxes are assessed, and so on. The formulae would not be nearly so elegant after running through the government policy machine. But really, it can’t be worse than existing tax code. My hope is to spur conversation on this.

Also, I am not a lawyer, so I am not sure the constitutionality of this, in that Congress would be adopting a formula for setting tax rates, rather than adopting the rates themselves, but it seems to me it should be okay. And if necessary it could be framed as a set of contingent tax rates spelling out the rates under an enormous number of conditions.

The Congress shall have power to lay and collect taxes on incomes, from whatever source derived, without apportionment among the several States, and without regard to any census or enumeration. 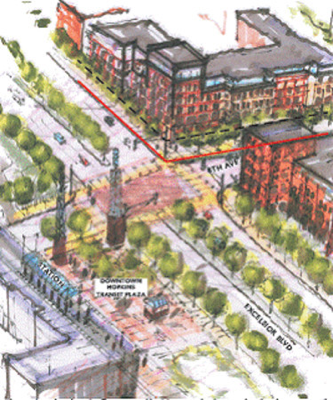 I don’t know how I missed this, Via CA, Patch reports on a “Pedestrian Seductive” project in Hopkins:

Let me just say, watercolors of trees and brick in the sidewalk are hot. However, steps from apartments onto sidewalks are merely amicable. Almost anything would be a higher and better use post-LRT than what is there now.
Wikipedia says the town used to be the Village of West Minneapolis, but took its name from the train station, named for the landowner (Harley H. Hopkins) on whose property the station was built.
The map is here.

Stickers on the Central Line
and more here: