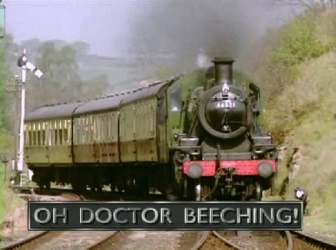 In the mid-2010s, I watched Oh, Dr. Beeching!, a British situation comedy from the mid-1990s describing life at a small railway station (Hatley) in the mid-1960s awaiting news about the Beeching Axe chopping away a line built in the mid-1860s.
Dr. Richard Beeching led the British Railways Board and prepared The Reshaping of British Railways which controversially rationalized the network by eliminating many routes and stations. He remains an off-screen character in the series, who is talked about, and rumored, but never seen.
One of the creators, Richard Spendlove, had worked his first career as a Station Manager, and so this show has a level of detail about the workplace that is far richer than anything else I have seen, including Thomas, the Tank Engine. It is a comedy, so the goings on in this small town (little more than a station and some railway cottages where the staff reside) are farcical. And it is a period piece, so you can examine elements of British culture, including high-quality culinary dishes, the Beatles, the Mods, short skirts, and references to Swinging London.
If you are looking for a way to spend 10 hours watching television about transportation, Series 1 and 2 of this show (Series 3 was never produced, leaving the fate of the station unclear) are entertaining. It is commercially available on Region 2 (UK) DVDs from BBC. I don’t believe it is commercially available to play on unhacked US DVD players (DVD player hacking is legal, just frowned upon by Hollywood).
It is un-commercially available elsewhere, one supposes. 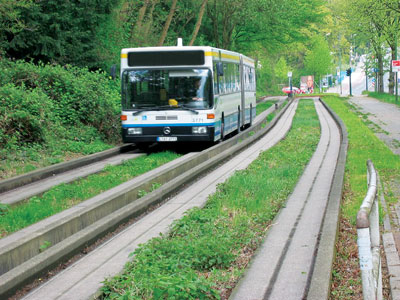 In a recent streets.mn post: Do or do not, there is no plan, (a Yoda reference for the Star Wars challenged, where “plan” is a verb rather than a noun) I complained about over redundant planning, speed of implementation, and paralysis by analysis for inevitable projects like the Midtown Greenway transit line. Google churns up 26,400 links for Midtown Greenway Streetcar Plans Minneapolis, so this is hardly a novel or under-considered concept. Pick one.
Is this a good project? Or how could it be a good project? I was not intentionally clear on that, since the point wasn’t whether I liked it, but why spend so much money on planning for something you will do anyway (If I correctly read the powers-that-be).

However, if you wanted to design a transit corridor, something in the Midtown Greenway, already pre-grade separated exclusive right-of-way with no traffic lights, one block off a major activity link (Lake Street), connecting high-frequency LRT at either end, with major activity at Uptown, LynLake, Midtown Global Market, and the Kmart at Nicollet is about as good as you can ask for, along with all the crossing bus (or future streetcar services once Minneapolis gets its way). The only wish is that it were somehow wider to accommodate bicycles and two lanes/tracks of transportation service continuously with room for stations and more greenery. But constraints are what create great design.

This of course should, like almost everything in the Twin Cities, be bus rather than rail based. It should be real high-frequency bus rapid transit, with stations and payment before boarding, and with informational signs. It should have electrical vehicles to reduce local emissions (the exact technology I will leave to vehicle engineers, whether it be on-board or via cable or wireless). Nice looking BRT with grass down the middle (as in the attached picture [the vehicle of course could look nicer]) along most of it. It would more or less operate like the most successful transit system in the Twin Cities, the University of Minnesota’s Campus Connector.

Why BRT and not rail? This was mostly explained here, but there is one further point: reducing transfers. Buses can enter and leave the greenway at either end (and with some additional ramp construction, somewhere in the middle) and then continue on to other destinations (e.g. the University of Minnesota, St. Paul to the East, The I-394 corridor to the west) which might not otherwise have direct rail service from the Midtown Greenway, or might not have it yet (e.g. the idea to tie the Midtown Greenway into St. Paul) since construction is not instantaneous.
One expects stations every half mile or so, at major crossings, but BRT would provide the possibility of express services on the corridor that skipped some stations.

Brendon Slotterback: A challenge to the market-oriented urbanists . Josh Barro presponds: Homeowners: The Cartel Next Door . [The Transportationist on Zoning and Externalities]