Mode choice is not generally a marginal thing. For a given market (a market here is an origin-destination (OD) pair, by time of day. [We could further break this down by purpose of trip, or socio-economic class of the traveler, but we won’t here.]), either almost everyone chooses one mode or another. Very few markets are competitive. To be competitive, the alternatives have to be perceived as having almost exactly the same travel time, frequency, reliability, and other characteristics, or the advantage in one characteristic has to be exactly offset by another. I am going to briefly describe transit use patterns.

Downtown is one kind of market, and larger cities than Minneapolis will even have higher transit mode shares. Non-downtown is a different kind of market, with a transit mode share much closer to zero. The regional mode share for all trips in Twin Cities is estimated at 5 percent for work trips. If the destination mode share is much higher than 5 percent for downtown Minneapolis (and downtown St. Paul, and the University), then it must be lower than 5 percent for other destinations. The US national number for mode share for all trips is under 2 percent, from the 2009 NHTS (though up from 2001). The 2000 Twin Cities TBI gives us an unweighted estimate of 1.4 percent of all trips by public bus. Soon the 2011 TBI will be out, and we can update.
Theory suggests there are two equilibria because transit is a positive feedback system (and the primary competing mode, automobiles, is a negative feedback system). The more transit riders, the more revenue, the higher the rate of buses (or trains) per hour (and the better the service, as with more riders, express and other services can be offered). At high levels of ridership (relatively high mode shares), losing a few riders because of small random exogenous shock, or even a bus-full will not be noticed in the travel times (schedule delays) of the remaining riders. At medium levels of ridership, losing just enough riders to result in service cutbacks will have a noticed effect on headways and thus schedule delays, driving transit ridership down further. This is the vicious circle that has destroyed transit in most of the US. As students of systems theory know, vicious circles are just virtuous circles in reverse. An exogenous shock increasing transit use should increase supply provided, reducing waits, and thus further increasing use. We imagine this might be a sharp sudden increase in the price of fuel. This only happens if the supply system is responsive, which typically happens with free markets, but not necessarily under government management.
So in a world where people do have the ability to have an automobile, either many travelers (in a narrowly-defined market) almost always use transit, and the frequency is high (the case for selected to origins to well-served activity centers), or almost no one does (the case almost everywhere else). 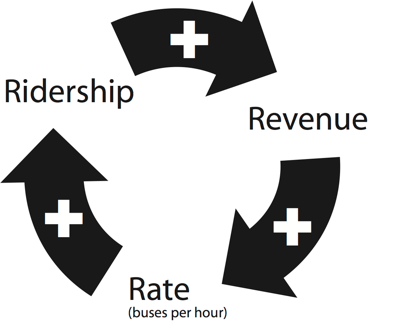 This says to me, fixed-route transit investment should be highly, highly focused in markets (OD pairs) where it is, or can cost effectively and financially sustainably become, the dominant carrier.
The transit goal should be reframed.
Transit is not competing to double its regional mode share for all trips from 1.5 to 3 percent. It is competing to increase its mode share in specific markets from 40 percent to 60 percent to 80 percent, and to add markets where it can dominate. (Regional mode share might be a byproduct of that, but it is an improper goal). Otherwise, the service is spread out like peanut butter and does nothing well.
To be clear, we cannot put the genie back in the bottle. As a society, almost all new urban form since the 1920s has been climbing up Mt. Auto and down Mt. Transit. Every change we make to the network to make it more convenient for cars makes it less convenient for transit. Every change in land use adapted to the automobile is maladapted to an environment served by transit. It would probably take another century of concerted effort to reverse this, and there is no evidence that efforts are concerted.
Yet, there remain markets, mostly those that existed before the 1920s, where transit is competitive, and even dominant. Instead of chasing butterflies, transit systems should focus on its dominant and dominatable markets, and play to its strengths. Everyone can think of local butterflies that are diffusing rather than concentrating transit’s attention.
If, where, and when the transit service is good, it will attract transit-oriented people to organize their lives around transit services, and may encourage new people to become transit riders. It might even encourage transit-oriented development to shelter those transit-oriented people, and transit-oriented stores and businesses to serve them. It cannot do this where the service remains poor.
====
Notes:
1. Depending on how precise we want to be with our definitions of origins, we can figure this out from Census data (at the block group or tract level). But we can’t know this from data at the block level. Unfortunately for analysts, there is a wide degree of variation within very small geographies, as people typically walk to transit, and walking is sensitive to relatively small distances and micro-scale factors. The Travel Behavior Inventory is too small a sample at the block level to compute block level mode shares directly, (as is the Census or American Community Survey). Models will give us estimates, and a regional planning model with 1200 transportation analysis zones and 24 time slices will estimate this number for 34,560,000 markets. In integers, most of those would be zero trip markets. In the planning model which uses real numbers, each of those markets has some probability of using transit.
2. There are insufficient observations for the Twin Cities from NHTS (apparently 11 unweighted transit users) to estimate transit mode share for the Twin Cities from the NHTS.
3. In my view, the purpose of transit is of course transportation, since other outcomes, like land development, follow from the utility of the network in providing real services.
4. In contrast to transit, where people are mostly a benefit in terms of service time, the more people who drive, the higher the travel time for all concerned (since capacity is hard to add in the short run). Driving is self-limiting (~2000 vehicles per hour per lane), transit services are limited at much higher levels of capacity (usually not reached except in the largest cities), and are usually instead limited by demand.