David King @ Getting from here to there: Steady Progress Toward Autonomous Cars:

“Rather than one day having a brand new model of fully autonomous vehicles, it is most likely that parts of the driving experience will be computerized (for instance fully autonomous freeway driving, just as fully autonomous parking is now commonplace) before the entire experience will be computerized. By encouraging and supporting incremental advances the technological, political and legal issues will have a chance to develop together, and adoption of new and safer technologies will happen faster. Consider what is happening with electric cars as a similar type of issue with deployment of new technologies. Electric cars are just not very popular as few people are adopting the revolutionary powertrains. The Chevy Volt is on hiatus, and Chevy just announced that it will be on hiatus an additional week. George W. Bush’s “Freedom Car” and Arnold Schwarzenegger’s “Hydrogen Highway” were failures, as was the entire “hydrogen revolution” because the infrastructure and technology isn’t there to support widespread adoption, and still aren’t. Maybe someday in the future hydrogen will be a standard fuel, but now people tend to really like their hybrids (Toyota is setting sales records with it’s Prius models) which are an incremental improvement to what people already use.
All of this is to say don’t hold your breath that autonomous vehicle technologies will first appear in a fully, full-time autonomous car, but also don’t expect that driverless cars will not become commonplace. Drivers are already ceding some driving to their cars, and over time they will cede more and more until the driver is simply a passenger. Then someday no one will remember that is was ever any different.”

David King @ Getting from here to there: Why Didn’t California Propose a Faster, Cheaper and Better High Speed Rail Project in the First Place?:

“Ultimately, all of the business plans, wild swings in price and size, and dubious claims of benefits leave me with the feeling that no one knows what, exactly, this train is supposed to accomplish. We can optimize transportation networks for various purposes, but I don’t see any evidence that the California HSR project is being optimized for any reason other than to prove that it can be built, at any cost.”

Nokohaha: Vegetable Man! Where Are You? :

“There was a time when Saturday mornings brought parade of vendors to good old Lincoln Avenue in Saint Paul. It often began with the Melon Man in a long wagon leaded with watermelons. He’d shout at the top of his voice at 6am waking up everybody in neighborhood. Pretty soon there followed the Vegetable Man, also with a horse-drawn wagon. All the housewives in the area had a soft spot for his amazing carrots and cucumbers. Next came Filthy Junk and Rag Man. The kids loved to harass him and call him names. He never got mad at them, but he used to spit if they came too close. The Junk Man was often followed by a young Irish woman with wheelbarrow full of Mississippi Mussels, alive, alive-oh!”

[Who says we need to go to the store, the store can come to us]

Strib: Transit looks to get going in the south, west metro :

“Experts agree there’s a color line developing in Twin Cities transit: While lots of places fantasize about future transitways, the serious projects are those that are far enough along to have been assigned a color-coded name as part of the Met Council’s so-called “Metro” system. If you have a color, that means you have a line.
Conversely, if you don’t have a color — a Red Line or a Blue Line or another such hue – you don’t have a line. You’re just standing in line.”

Cross-posted from streets.mn: Minneapolis, the Venice of the Upper Midwest .

The City of Minneapolis recently received Federal funding under the Advanced Quality Urban Waterways Initiative (New Starts) Retro-Transit program to investigate alternative scenarios for transforming city streets into canals. By revealing the underlying stream beds that have been paved over in more than 150 years of the city’s existence, the proposed Urban Waterways system aims to restore the natural habitat of the endangered Musk Beaver and the Yukon Green Frog within the city of Minneapolis. It is said this is 17 percent more effective than green roofs in filtering polluted rainwater before it drains into the Mississippi River.

In addition, the canals will create a distinctive urban form and enable the deployment of a new set of environmentally-friendly (green) water taxis. These water buses will be painted Chartreuse to aid in identification. Express water buses will stop only every other block. The aim is to eventually convert every street and avenue to a canal, so that all travelers will have to either walk on the Skyway system or use public water-based transit to reach their destinations. To avoid transfers, local public transit agencies plan to commission designs for amphibious water/land buses.

In addition to the AQUWI grant, Minneapolis is also happy to have received a “Swimmable Communities” grant from the US Department of Parks and Recreation to help pay for the study. This grant will focus on the feasibility of making the canals swimmable year round, through heating in the winter (and cooling in the summer). It is anticipated that heating will be in place during the winter months of August to July. Minneapolis Director of Canals, Dutchess Bridgewater, says “Initiativizing this project will put Minneapolis uniquely on the Map with our sister cities of Venice, Stockholm, and Amsterdam”.

Archeologists have found that the land Minneapolis was built on was historically a swamp, dubbed the Eye of the Pig, that was filled in by native Americans around 1100 AD to form the capital of the civilization of Antonopolis. That civilization collapsed about a century later, for unknown reasons, but mysterious runes found in northern Minnesota suggest that an invasion may have been the cause. 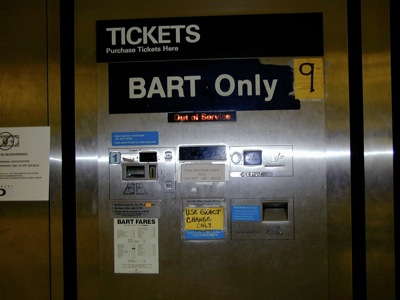 This past Sunday I went to Berkeley to give a talk. Like all good Transportationists, I took BART from SFO to the Downtown Berkeley station. As noted previously, I carry a BART fare card with me, and so I used that to enter the system at the airport. When I got to Berkeley, despite the a few dollars on my card (the amount was unreadable due to the poor printing from previous trips), I still owed money, so I went to the Addfare machine. It said I needed to add $4.05. I had 4 dollar bills and some twenties. The machine only took singles and fives. It further did not take credit cards. How was I supposed to leave?
I was literally Charlie on the M.T.A..
The station agent (at least there was a station agent to keep me from being a gate-jumper), pointed to a change machine, outside the gate. A fellow traveler in the same predicament went with permission of the agent, outside the gate, to get change, to get back inside the gate, to put money on the card, so she could go outside the gate. She went before me while I watched her bag, to get change, which she then put into the machine.
I begged a nickel from her and completed the transaction. I figure, since I am in Berkeley, might-as-well ask for handouts.
[Pictures of BART machines, out-of-order, from the last decade. I assume they are fixed by now and there are no more broken BART machines.]