In the hope of finding an alternative means of measuring GDP, macroeconomists Xi Chen and William Nordhaus of Yale University turned to nighttime images of the globe taken by U.S. Air Force satellites. They overlaid a grid on these high-resolution images and measured the amount of light, or radiance, emanating from each cell. For countries that already provide economic information widely considered trustworthy, brighter radiance in a given region correlated tightly with a higher GDP in that region, the researchers report online today in theProceedings of the National Academy of Sciences. Using this data, the economists built a statistical model, correcting for certain variables such as location on a continent (reflections on large bodies of water can distort satellite images) and distortion of the image by the atmosphere, that then allowed them to estimate the GDP for countries with unclear economic status. 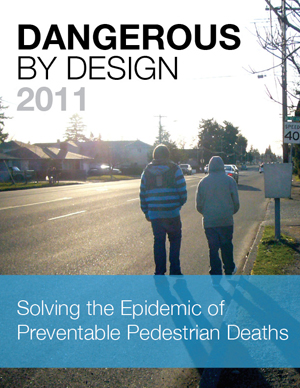 Transportation For America has put out a new report and Map of Fatalities
DC Streetsblog has an article on the subject.
In short, while Missing Persons may have been correct that “Nobody walks in LA”, nobody should walk in Florida. As a pedestrian myself, I am pleased metropolitan Minneapolis is ranked 48 (which is relatively good) out of 52 US metros above 1 million population.
As with Bicycles, it seems the more people who walk to work, the safer walking is. (And the causation is likely to be mutual).
It is interesting to note:

Pedestrian fatalities have fallen at only half the rate of motorists, dropping by just over 14 percent during the period.

Two major reasons auto fatalities have dropped is safer vehicles (airbags, crash resistance, etc.) and better emergency medicine and response time. Clearly only the latter would play into pedestrian fatalities. These numbers suggest each factor is about equally important in the decline.

There is a Minnesota Go Channel‬‏ on YouTube, featuring more videos about issues facing the transportation community. Well worth visiting. As noted previously, my video is here.