1) Respect “the genius of a place.”
2) Subordinate details to the whole.
3) The art is to conceal art.
4) Aim for the unconscious.
5) Avoid fashion for fashion’s sake.
6) Formal training isn’t required.
7) Words matter.
8) Stand for something.
9) Utility trumps ornament.
10) Never too much, hardly enough.

GOOD asks: Why Are Car Seats So Poorly Designed? :

The difficulty of installing a car seat affects the market for car rentals, trains, planes, buses, and taxis. It is also hard to make it thorough childhood without purchasing three or more seats, and there are dire warnings against using a pre-owned one. If the United States is serious about moving away from fossil fuels and toward ride sharing, reuse, and public transportation, designers are going to have to solve the last mile problem … for parents. You got me on the train, now how do I get to grandma’s house?
Every time we plan a U.S. trip, the car seat becomes a major part of the conversation. Do we take ours, meaning we have to carry it, along with child, on the plane or train, install it in a strange car, vacation, tote it on the plane or train again, and reinstall in our car? Or do we take our chances at the other end with a rental car and a rental car seat—which is often dirty and, at an additional $10 per day, expensive? All cars don’t have the same belts and latches. All seats are not installed the same way. And the car rental attendants don’t help, because it is a liability issue. One tends to reach the conclusion that it would it be easier to drive, in your own car, leaving the seat in place.
But it is also a problem for shorter trips. We would sign up with Zipcar tomorrow if we weren’t anxious about having to install the seats (yes, our family now requires more than one) in a different model of car every time. When you are paying by the hour, you don’t want to spend the first 30 minutes strapping in the car seat. On a visit, my father can’t zip off with my son for ice cream because I don’t want to spend as much time moving the seat from car to car as it takes to eat a cone. And let’s not even talk about cabs. During this winter’s blizzard, we spent an hour and a half on the subway at 10 p.m., sleeping child in a backpack, because once your child is out of the Infant Graco Snugride, there’s no safe way to take a taxi. You try checking the car seat at a museum. Or wearing it on your back.

So much design innovation is concentrated on grown-up seats. But the children’s car seat languishes. My idea? A universal docking system, across all car models, across all car-seat manufacturers. Two mounts, in the backseat of every car, that match two “feet” on the base of every car seat, from infant to booster. To take out the seat, you push a button to unlock the mounts. To install the seat, you center it over the mounts, press down, and hear a satisfying click. Installation in a rental car, in a taxi, in a car pool: two minutes. You could ditch your car.

This sounds to me like a good idea, hence it is appropriate for the GOOD website. The difficulty is that it will take a decade to phase in given the sluggishness of vehicle turnover.
The assumption inherent in this proposal of course is that car seats are good things (my children have all used them, but I try not to obsess about perfection on this, the point is that they don’t move when the car stops). Steven Leavitt, author of Freaknomics, reports different findings:

[Heaton] found no difference in the death rates or incapacitating injuries for children in car seats versus children using adult seat belts. Like me, he found a slight advantage for car seats in preventing non-incapacitating injuries relative to adult seat belts (car seats offered a 10% improvement for these less serious injuries in both of our samples). The only difference is that in his data the gap in injuries between car seats and seat belts is statistically significant, whereas in my data set it was not.

Of course the car seat lobby, the medical industry, and the nanny state all promote car seat use for children up to the age of 65, or a weight of 150 pounds, or height of 6’6”, whichever comes later, and these limits keep increasing.

”
It’s not something I know anything about — actually, it’s not something many people know about — but I’ve posted some links about the security features of the U.S. presidential limousine. So it’s amusing to watch the limo immobilized by a steep grade at the U.S. embassy in Dublin. (You’ll get a glimpse of how thick the car doors are toward the end of the video.)
“

Annie Lowrey in Slate Magazine: Long commutes cause obesity, neck pain, loneliness, divorce, stress, and insomnia. : “This week, researchers at Umea University in Sweden released a startling finding: Couples in which one partner commutes for longer than 45 minutes are 40 percent likelier to divorce.”

NY Times has a nice infographic: The Great Kilowatt vs. Gallon Face-Off 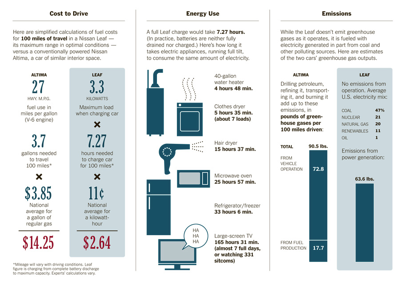 “IN the meantime, transportation is one area where progress has been slow for decades. We’re still flying 747s, a plane designed in the 1960s. Many rail and bus networks have contracted. And traffic congestion is worse than ever. As I argued in a previous column, this is probably part of a broader slowdown of technological advances.
But it’s clear that in the early part of the 20th century, the original advent of the motor car was not impeded by anything like the current mélange of regulations, laws and lawsuits. Potentially major innovations need a path forward, through the current thicket of restrictions. That debate on this issue is so quiet shows the urgency of doing something now.”