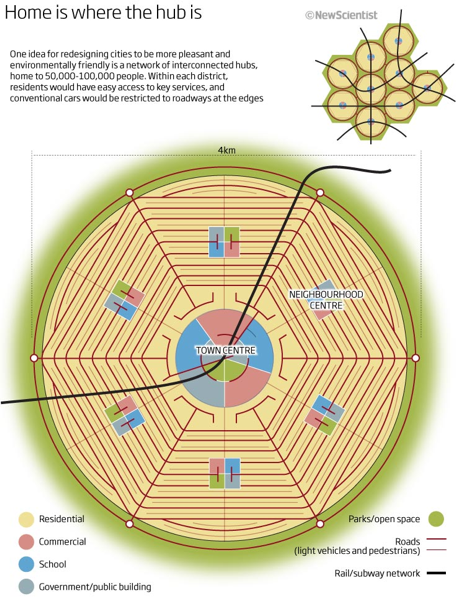 The Long Now Blog summarizes New Scientist (behind a registration) Some ideas on Civilization 2.0 (or) New Scientist plays Benevolent Dictator (not the fabulous game by Syd Meier).

Mark Delucchi at the Institute of Transportation Studies at the University of California, Davis, envisions districts laid out concentrically around a central business hub which residents access on foot, by bicycle or with light vehicles like golf carts (see diagram). ‘We believe that one of the major things that keeps people out of these low-speed vehicles is that people don’t feel they function safely enough in a regular road system,’ he says. To avoid that, conventional cars and trucks would be segregated on separate roadways, perhaps at the outskirts of each district.
To make this layout practical, every resident would need to live within about 3 kilometres of a hub, Delucchi estimates, giving each district a population of about 50,000 to 100,000, while maintaining a pleasant living environment of low-rise buildings. Each hub could then link to other hubs through a mass transit system, allowing people easy access to other districts for work, and to the attractions of a larger city. A few cities, such as Milton Keynes in the UK and Masdar City in Abu Dhabi, already use some of these principles.

I like the idea conceptually, it reminds me of lots of planning schemas from the 1960s and earlier (Radburn, Ebenezer Howard) (like Zombie Economics, we have Zombie Planning), including the early plans for Columbia, Maryland but I have been to Milton Keynes , and this idea is nothing like Milton Keynes (which has the world’s longest shopping mall) (or Columbia, whose mall is no slouch) because the density too low. There are not 50,000 people within 3 km of the center in 1960s planned communities. I would also note that low-rise means ‘not high-rise’, it does not mean single-family in this concept.

The more important question is how do you get from here to there without dictatorship. That is, what set of rules of the game will lead to this possibly socially optimal outcomes. Clearly current regulations, policies, prices, ownership structures do not. Would large-scale land/transportation capitalists build such cities (the modern Jim Rouse or Del Webb or Robert E Simon)? If so, when and where? We have seen difficulties both with central planning and with capitalism in achieving productive ends, but there must be some mechanism to coordinate human behavior at the metropolitan level to align interests. I do not think full cost pricing is sufficient. While that internalizes negative environmental externalities, it does not internalize lack of positive agglomeration economies.

3 thoughts on “Home is Where the Hub Is”